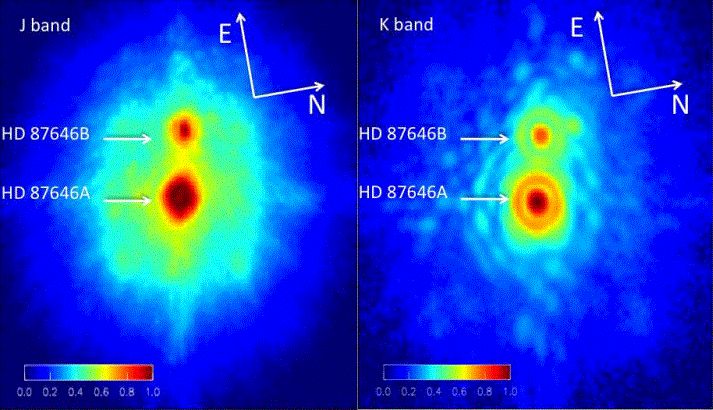 Star HD 87646, located at a distance of about 240 light-years from our planet, is a bright star of spectral class G, accompanied by a dim companion star of spectral type K. the Main star system HD 87646A, about 12 percent more massive than the Sun and has a radius of the order of 1.55 solar radii. Star system are separated by a distance of only 22 astronomical units (distance from earth to the Sun).

A team of researchers headed by Bo MA from the University of Florida, USA, observed the system of HD 87646 since 2006 with the help of a large number of ground-based telescopes. These observations allowed the scientists to detect in the system are two new components that have received designation 87646b HD and HD 87646с, which represent respectively the giant planet of a mass of 12.4 mass of Jupiter and a brown dwarf with a mass of 57 Jupiter masses. The orbital period of the object HD 87646b is about 13.5 days, while the orbital period of the brown dwarf is 673 days.

To explain the origin of this system the authors proposed two hypotheses. The first of these versions all four are discovered in the system of HD 87646 object was formed as stars by fragmentation of molecular clouds, however, two of these four objects, the stars were not due to lack of mass. According to an alternative version of the two subsisting object system formed from a protoplanetary disk as the giant planets. To ascertain the true origin of the system of HD 87646 more research is needed, say the authors.