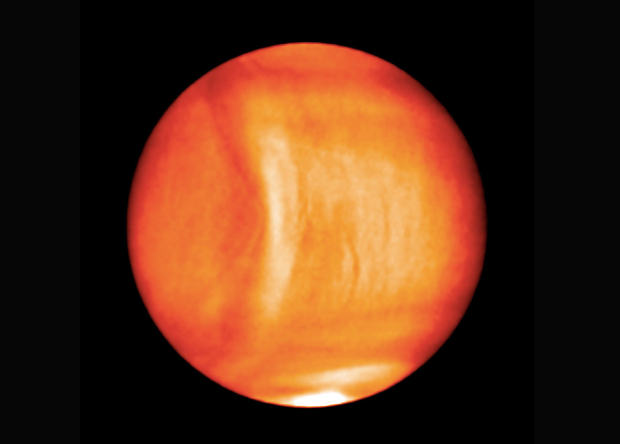 The speed of rotation of Venus around its axis changes when its dense atmosphere interacts with mountain chains on the surface, according to the journal Nature Geoscience. As a result, for one Venusian day, its duration may increase by two minutes.

Venus rotates around its axis very slowly: one day on the planet lasts about the same as a year – about 243 terrestrial days. However, its atmosphere moves much faster than the surface – a dense layer of clouds is enough for only 4 days in order to complete a complete revolution around the planet. The reasons for this phenomenon, called “superrotation”, have not yet been explained. Another thing is also unknown: despite the fact that the wind speed in the upper layers of the atmosphere reaches 350 kilometers per hour, stable structures have repeatedly been observed in the atmosphere of the planet. The most famous of them is the so-called “smile of Venus” – formation in the form of an arc, which was recorded by the “Akatsuki” probe for four days. According to scientists, it could appear due to atmospheric gravity waves (not to be confused with fluctuations in space-time recorded by LIGO), which can be observed when flowing through winds of mountain massifs. Now astronomers claim that the interaction of mountains and the atmosphere on Venus can also increase the duration of the day.

Scientists led by Thomas Navarro (Thomas Navarro) from the University of California conducted a computer simulation of the general atmospheric circulation of Venus to determine how unusual structures are produced in its gas shell. In their model, researchers took into account all known physical phenomena that are observed in the atmosphere of the planet, including convection and radiation transfer.

The simulation showed that gravitational waves, as a rule, appear around noon and quickly disappear with sunset. The only exception was the Beta region, a volcanic hill about 2500 kilometers in size – there waves appeared early in the morning, which agrees with the results of observations. When the Sun rises, the temperature of the planet increases by two kelvin, which reduces the stability of the atmosphere. As a result, the stream at the foot of the mountains can rise high enough to cross the mountain range. Due to the fact that an elementary volume of air moving upwards is acted upon by the returning force (in this case gravity), gravitational waves form in the gas shell of the planet. Closer to the evening, the stability of the atmosphere increases, and when the sun sets, the “air” stream at the bottom of the mountains is blocked and gravitational waves disappear.

Gravitational waves were also able to untwist the planet due to fluctuations in the atmospheric pressure that they create. As a result of their impact, the duration of the Venusian day can increase by 2 minutes over 243 terrestrial days. This explains why the Magellan and Venera-Express probes sent with a difference of 16 years showed different data – the difference between the results obtained during the two missions was 7 minutes.

In the future, astronomers hope to make their model more accurate and also take into account the influence of the Sun on the speed of rotation of the planet. In addition, they hope to better understand the processes taking place in the atmosphere of the planet.