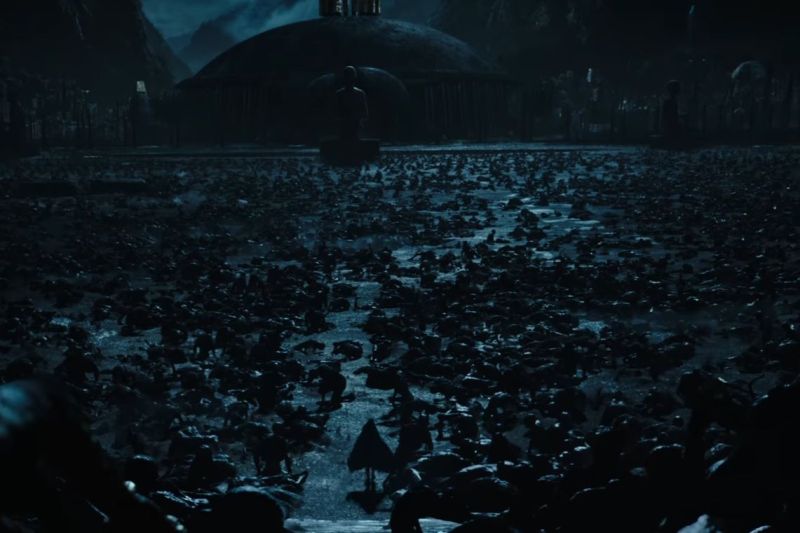 Since suitable technologies appeared, we began to search for life around other stars. But colleagues on the smart shop to detect and failed. Maybe the fact that they are not? If so, why?

Here you have one rather depressing equation: N = R * × fP × ne × f1 × fi × fc × L. This is Drake’s equation, describing the number of alien civilizations in the Galaxy that we may sometime be able to communicate with. Its conditions correspond to such values ​​as the proportion of stars with planets, the proportion of planets where life can arise, the proportion of planets capable of supporting intelligent life, and so on. Using conservative calculations, the minimum result of this equation is 20. That is, there should be 20 intelligent civilizations in the Milky Way with which we can hypothetically contact and who hypothetically can contact us. But today we have not made contact with anyone. Moreover, we did not find anyone and continue to drift on our cosmic speck of dust, looking hopefully into the depths of space.

The Drake equation is an example of a deeper problem discussed in the scientific community. Considering only the size of the Universe and our knowledge that intelligent life has evolved – at least once – there must be signs of alien life in space. This is most often called the Fermi paradox, named after the physicist Enrico Fermi, who first thought about the contradiction between the high probability of the existence of alien civilizations and their apparent absence. Fermi summarized it with a succinct question: “Where is everyone?”

Perhaps this question was wrong. Probably the best option, albeit more alarming, may be “What happened to everyone?” Unlike the question of the existence of life in the Universe, this has a clearer answer: The Great Filter.

Emptiness of the Universe

Alien life probably exists, but we do not see it. Consequently, the fact may be that during the development of civilization, it faces a serious and frequent obstacle, which brings life to an end, before it becomes sufficiently reasonable and widespread so that we can see it – and this is some great filter.

This filter can take many forms. Perhaps the location of the planet in the Goldilocks zone or habitable zone is in a narrow strip around the star, where it is not too hot and not too cold for life to exist – and the presence of organic molecules on this planet that are capable of life education is unlikely. We have seen many planets in the habitability zone of different stars (about 40 billion in the Milky Way), but it is possible that their conditions are not suitable for the origin of life. 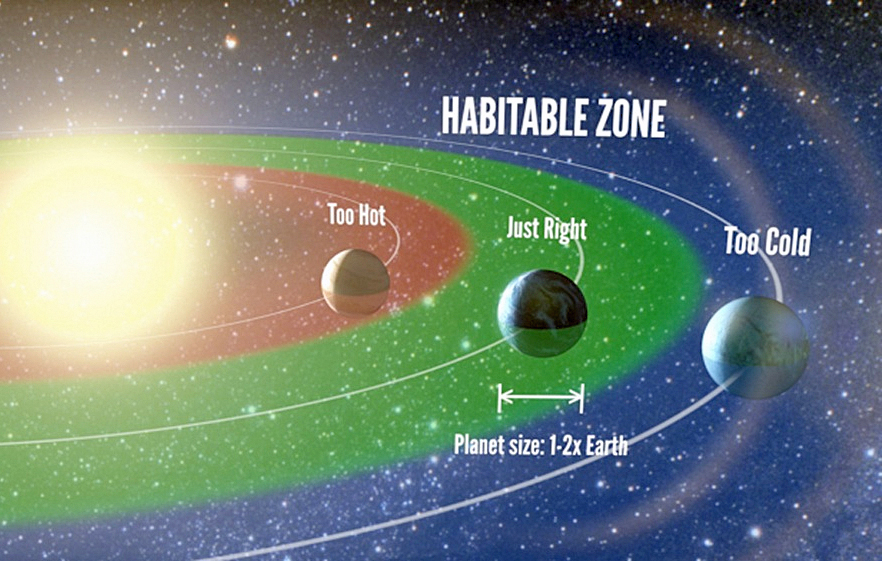 Schematic designation of the Goldilocks area or habitable zone / © beardycast.com

A great filter can occur in the very early stages of the development of life. Perhaps, when you went through biology in high school, you remember the phrase “mitochondria are cell power plants”. However, mitochondria were once individual bacteria that led an independent lifestyle. At some point, a single-celled organism on Earth tried to eat one of these bacteria, but instead of digesting, the bacteria entered into tandem with the cell and began to produce additional energy, which helped the cell to develop in such a way that the formation of higher forms of life. It is likely that such an amazing event happened in the Milky Way only once.

In addition, the filter may be the development of a large brain – like a human. In the end, we live on a planet that is inhabited by many creatures, but the intellect, like human, appeared on it only once. Probably, living beings on other planets simply do not need to develop such energy-intensive neural structures necessary for the intellect.

Will we have a great filter in the future

All of the above possibilities suggest that the Great Filter is already far behind us, and humanity is a successful species that has overcome an obstacle that has become incredible for any other life. However, this may not be the case. Life can constantly evolve to our level, but go into oblivion as a result of some kind of disaster. The discovery of nuclear energy is a probable event for any advanced society, but it is capable of destroying us – just like this developed high-tech society. The use of resources to create an advanced civilization is killing the planet itself: a striking example is global climate change, which scientists consider to be almost completely provoked by human actions. Or it may be something completely unknown to us – a serious threat that we will not notice until it is too late. 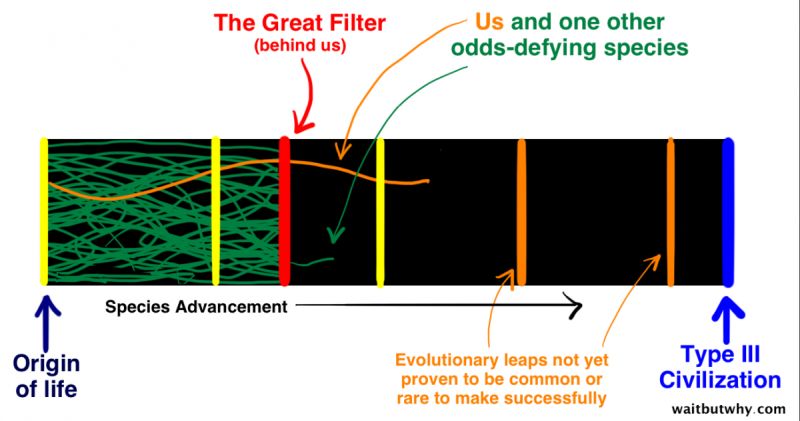 Schematic designation of the Great Filter, already left behind us and another hypothetical civilization / © Wait But Why

Also one of the saddest and even illogical assumptions about the Great Filter is that humanity should not look for alien life – especially one that has already reached a level of technological development, similar to ours. If the galaxy is really empty and dead – speaking of a different life – the chances that we have already passed the Great Filter increase. The galaxy can be empty simply because another life could not pass some test, which mankind managed to overcome.

If we ever find an alien civilization, but at the same time the space will not be teeming with intelligent life, this may mean that the Great Filter is still waiting for us somewhere in the future. In theory, the galaxy should be replete with life, but it is not. Another possibility is that other civilizations that should inhabit the Milky Way were erased from the faces of their planets by some kind of catastrophe, which we and our alien comrades have yet to face.

Anyway, we still haven’t found any other life besides the one on Earth. And although it may sometimes arise that we are alone, this only indicates that the chances of humanity for long-term survival are slightly higher than it might seem.