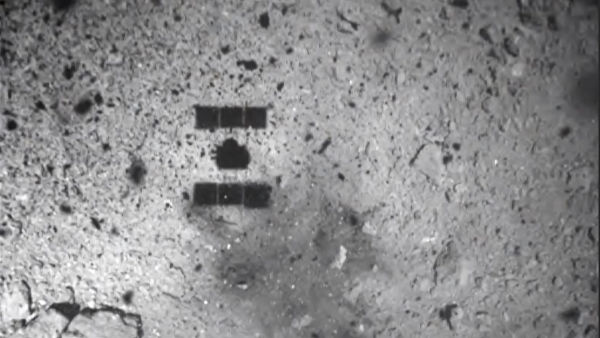 The Japanese probe Hayabusa-2 sent photographs to Earth, obtained after the supposedly successful “shelling” of the surface of the Ryugyu asteroid and sampling of its matter, said the mission at a press conference at JAXA.

“Other pictures will be transmitted to Earth only in the evening, but now we have a picture taken by the main camera Hayabusy-2 immediately after take-off from the surface of the asteroid. You can see not only the shadow of the probe, but also the beacon, traces of the engine and dust raised in take-off, “said Makoto Yoshikawa (Makoto Yoshikawa), head of the mission at JAXA.

The automatic station “Hayabusa-2” was launched into space in December 2014 to study and take samples on the Ryugyu asteroid. Scientists hope that it will bring to Earth the first absolutely pure samples of the primary matter of the solar system.

The Japanese apparatus reached its goal in early June last year and began a long procedure for braking and drawing closer to the asteroid. Having received the first images and data on the device of the surface and bowels of the celestial body, the probe began to prepare for the procedure for the collection of soil.

The first steps to implement the main mission mission, including the rehearsal for landing Hayabusy-2 on the surface of Ryugu, were to begin in early October of this year. She had to move in January due to the fact that scientists did not expect that the asteroid will be littered with large cobblestones.

Yesterday night, the Japanese probe successfully executed this procedure, dropping to the L08E1 point on the surface of the asteroid and firing at it using a five-gram tantalum bullet. As shown by telemetry data, this procedure was completed successfully, after which the apparatus returned to a high orbit.
At the same time, as the mission participants themselves emphasize, it is not yet clear whether Hayabusa-2 caught enough dust and stone dust, lifted into the airless space after the “asteroid bombardment.”

As noted by Yoshikawa, the first photograph taken by the probe immediately after launch from the surface of the asteroid adds confidence that everything went well. However, he stressed that the dust and dark traces that are visible in this image did not necessarily have to appear as a result of the “bombardment” of Ryuju.

In his opinion, small amounts of regolith could be present in the landing zone of Hayabusy-2, and they could climb into the space above the asteroid at the moment when the probe turned on the engines. In addition, part of the dust particles could fly out of the socket, with which the Japanese apparatus collected samples of matter after the shelling of Ryugu.

If the “bombardment” is recognized as successful, then Japanese scientists will begin to think about the implementation of its second phase – dropping a more powerful explosive device onto the surface of Ryugu. According to the mission, this will happen in March or April. Otherwise, Hayabusa-2 can spend two more attempts to descend to the same point and re-collect soil samples.