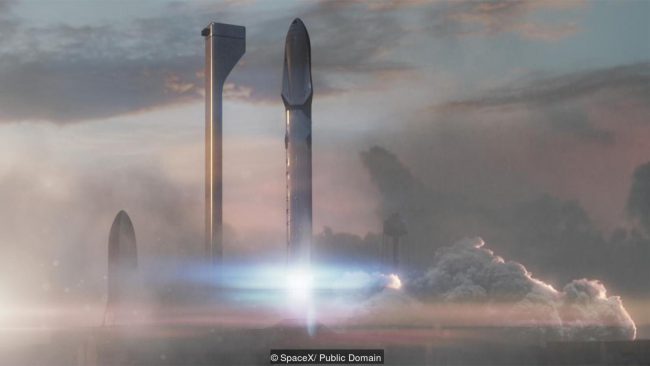 On the way of the ambitious plans of Elon musk on Mars colonization many obstacles. Last week, the head of SpaceX, said that over the next 40-70 years will move to Mars at least a million people.

For example, we brought hundreds of people to the Red planet. For example, SpaceX has developed a giant ship, big enough to accommodate a hundred people and allow them to survive the months-long trip in the vacuum of space. For example, potential colonists protected from dangerous cosmic radiation, fed, watered, amused — and they were the first interplanetary citizens of our species.

But the real difficulty will begin only then. People have to live on Mars, not even to live, to survive, and the Red planet is not adapted for this. A hundred years ago people seriously scared of the reports that on Mars, it turns out, is a race sverhrazdutaya creatures that have been planning to attack Earth. They brought the car tips and bombed half the planet, until we found them Council.

The funny thing is that even if there is no hostile race on Mars will not be one breath of the Martian atmosphere — and death. Depressurization is death. A serious accident is death. Death, death, death, which had been welcomed by going to Mars. The first colonists will have to be willing to die, and no one there to bury them will not in order to save resources.

And also they should be ready to sabotage. One hundred people who devoted his life to another planet, can be customized seriously, but so seriously they will fight for their rights. Touch with the real world for them would be very precarious and certainly not instant. At SpaceX there will be no leverage against their own customers. Away from the prying eyes of earthly governments, the residents (citizens) of Mars may give up their earthly guardians, to go underground, to form trade unions, to begin to mutate, eventually. Between the warring factions on the newly developed planet can stand the representative of the Earth — as an intermediary — but who will be up to him what is it? Most likely, the colonists will stay away from the “blue men” from the Ground.

Of course, the above-described problems is insufficient to evaluate all the potential threats, but just imagine what would happen if you add them to the long list, which will train the engineers of SpaceX. Here on Earth, we know the price of human errors — and better yet, know the price of human intention. It’s particularly vicious.

Questions to the Mask people have accumulated so much that if everyone gave a dollar, he would become a billionaire again. How it will work? How is that even legal? This question may not be worth it to ask in the first place, but before it we have reached the end of it all.

Joanne Gabrynowicz, Director of the International Institute of space law, argues that no legal basis, which could explain most of what Musk has stated in its plans just yet. If it is short. Yet the billionaire is not even the permission to send one robotic probe to Mars, not to mention the thousands of citizens of the Earth.

In the US, for example, for the display of molecules in orbit meets the Federal aviation administration (FAA). It States everything that will be sent into orbit and what will come back. But once you are in orbit or on another celestial body, the rules become a little vague. “At the moment there is no legal regime for space activities,” says Gabrynowicz.

So an American company could have something to do, she needs to obtain permission from the appropriate Federal authority, the FAA or the U.S. Department of State. Last month, for example, a participant Lunar X-Prize — Moon-Express — received “favorable definition of valuable cargo” from the FAA in response to a request to send a robotic module to the moon. The feds decided that this precious cargo will not harm the people and will not jeopardize the national security of the United States, so Moon Express can safely fly. For the first time a private American Corporation received permission to land on a celestial body.

And this approval was met with outright cheers of happiness from the commercial space community, who took it as a sign that the feds favor of space activities. But the FAA also has made clear that he is not going to do so always.

“Other companies, or even Moon Express, have to go through such an inspection, valuable cargo whenever they want it go somewhere. All will be considered individually”.

Moreover, to obtain a permit for valuable cargo — is not the same as to obtain a license to operate after landing. If you want to ride on the surface, to look for precious metals to send a message to Earth or to build a city, we will need other licenses.

All we have at the moment is the outer space Treaty of 1967, according to which the country is responsible for any activity of their companies on other celestial bodies. And if SpaceX is going to build a colony on Mars, the U.S. will have to carefully monitor and regulate this process, whether they like it or not. This will be especially strange on the background of the prohibition of nuclear weapons in space to which all take very kind, and the prohibition of contamination of celestial bodies.

Do not forget that the outer space Treaty also prohibits any person assigned territory in space. That is, under current law, the Martian colonists will be a squatter (squatting) or pirates. However, whether it’s their care is another matter. And should you?

“The legal answers to these questions for people just yet,” says Gabrynowicz. — I’d like to know their status: are they workers, tourists or the crew? What kind of a contract will be concluded between these people and companies? Would there be any circulation of funds? Will have to decide.

Different kinds of bills which began to be taken more recently, might start to fill in the gaps in the regulatory framework relating to commercial robotic activities in space. But the plan Mask to send thousands of colonists to Mars in the coming decade will require significantly speed up this process. But who wants to hurry in such matters? Who needs it?

Until then the space will remain a wild West that will have to wait for its earliest explorers.

The question of the total cost of the event is no less doubt than all the other aspects of the future. As it turned out, Mars is such a Golden goose that still eats the gold, and carries the usual eggs. Armed with traditional methods and getting all of the right, it would be theoretically possible to sell tickets to Mars for $ 10 billion. But who will buy them?

To avoid this absurd scenario, Musk wants to develop a new reusable system of transportation that can carry one hundred people at a time. This will significantly drop the cost — ideally up to $ 200,000 for a ticket, that is, to the cost of an average home in the United States. Cost reduction will contribute to the filling of the vessel in Earth orbit before its departure to a new home.

But what we didn’t notice in the presentation, Mars is the one who will Finance the embodiment of this whole undertaking. The Musk explained that he would like to see some mix of public and private investors together invest in the project. But this project will be highly risky. Rides like a restaurant on Board will make the journey “cheerful”, but the risk of dying will be, and considerable. As we have said, the first colonists will have to be willing to die at any moment. To pay $ 200,000 and to die in hopes of being the first builders of Mars.

Wonderful charm should have a person, virtually guaranteeing death for $ 200,000 and hoping to raise hundreds, thousands, and even millions of people willing to go for it.

The calculation of the economic viability of the plans for the colonization of Mars will not be easy, but one man already tried to do it. Sydney Do, a scientist from mit, recently surveyed other similar scheme — Mars One — which also is planning to establish a Martian colony by 2024. Du has done the calculations and found that the Mars One plan is “fundamentally impossible,” largely because of the increasing cost of maintaining human presence on the red planet.

“It is expensive from the point of view of the need to supply people with parts, maintenance of life support systems,” he says.

What he thinks about the project? The project definitely forward thinking, but at the same time deliver 100 people to Mars is a serious technological barrier. The maximum that we could have imagined until recently, that’s eight people. Plus the spacecraft will be very difficult. Almost the same mass as the international space station.

However, the main claim to Do a Mask — that he had discussed the relative value of delivering people to Mars, and not maintaining their presence there. How many people will cost the night on Mars? Not more expensive than a night on the road? Answering people’s questions, Musk said that his company was focused mostly on transportation. In other words, SpaceX is airline. They are not going to build a hotel.