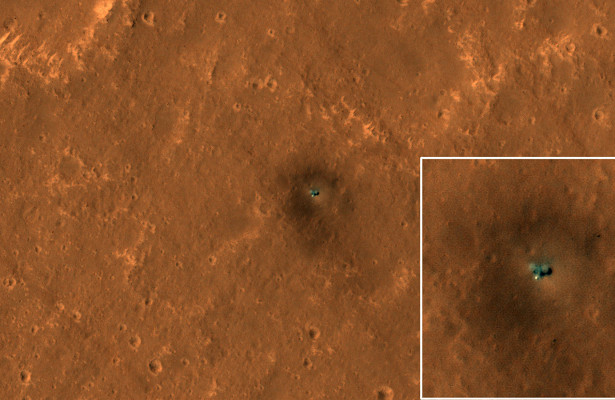 HiRISE monitors InSight’s landing site in the Elysium Planitia area on the Red Planet for surface changes such as dusty devil marks. The InSight image, taken September 23, 2019 from an altitude of 272 kilometers, is a new NASA image – the best of the still taken from space. It clearly shows two round solar panels on both sides of the housing of the landing module, with a radius of 6 meters.

The bright spot on the underside of the spacecraft is a domed protective cover over the InSight seismometer. The dark halo surrounding the spacecraft arose as a result of the fact that landing engines with jet rockets left a mark on the surface during landing.

Several factors make this image clearer than the set of images obtained after the InSight landing in November 2018. Firstly, this time there is less dust in the air. The shadows are offset from the landing site because this image is tilted to the west. Lighting was also optimal to prevent bright reflections from the landing gear or its solar panels, which obscured the surrounding pixels in other images. However, vivid reflections are inevitable with the seismometer cover south of the descent module due to its dome shape.