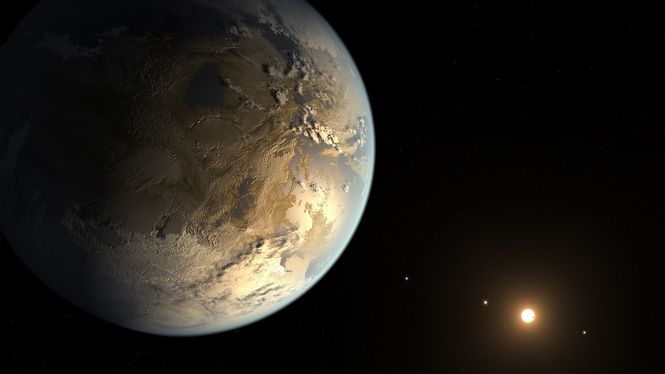 Kepler-186f is called one of the most promising for the colonization of exoplanets. It is located in the “inhabited zone” of the star, its dimensions roughly correspond to terrestrial ones – and now scientists have found out that there is a stable climate change on the planet.

Of all the exoplanets discovered outside the solar system in recent years, the most attractive for astronomers is the Kepler-186f. It is often described as one of the most similar to the Earth exoplanets, and new studies only confirm the guesses of scientists.

The slope of the axis of the planet and how much it changes over time, directly affects the change of seasons and climate, since it depends on it the amount of light the star reaches the planet. The presence of a stable axial slope means that the planet’s climate is stable and the seasons alternate on an ongoing basis. To understand the nature of climate change on the Kepler-186f, researchers from Georgia Tech examined the relationship between Earth and Mars. Both these planets exert a great influence on each other, as a result of which their axial slopes can become unstable. Strangely enough, in this case, the stabilizer is nothing more than … The moon. Yes, our moon is the only satellite in the solar system with a stabilizing effect.

A similar connection can be traced in Kepler-186f, where it interacts with the neighboring exoplanet Kepler-62f. It is also similar to Earth, although researchers note that this cosmic tandem is still different from Earth and Mars. Their relationship is not so pronounced, besides, it is not yet known whether they have moons. But, even in the absence of satellites, the axial slopes of the two exoplanets remain stable for tens of millions of years. About this story, Professor Ganji Lee, the author of the study, in his press release.

“Our study is one of the first studies examining the climate of exoplanets. It will contribute to understanding how the nearby planets function, “Lee believes.