How black holes are born? 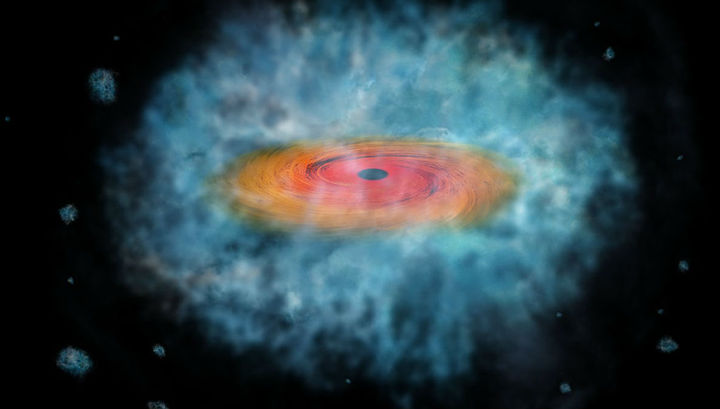 How are supermassive black holes that sit at the centers of most galaxies? Astronomers theorize on this subject a lot and with undisguised pleasure.

But this time the Italian astrophysics seem to have made a really big step forward in understanding how to form such space giants. They approached the issue from the practical side and found two objects in the early Universe, which can give the correct answer to this intriguing question.

The researchers used data collected from space telescopes “Hubble” (Hubble) and “the Spitzer” (Spitzer Space Telescope), and Chandra x-ray Observatory (Chandra X-ray Observatory). Analyzed under the new methodology a large amount and constructing their model, they found the currently best evidence for the existence of “germs” of black holes that eventually turn into these all-consuming monsters.

Both the newly found candidate was formed less than a billion years after the Big Bang, and have an initial weight of about 100 thousands solar masses.

“Our discovery, if confirmed, will explain how these huge monsters are born,” says the study’s lead author, Fabio Pascucci (Fabio Pacucci) of the Higher Normal School in Pisa.

There are two main theories explaining the formation of supermassive black holes in the early Universe. The first assumes that “germ” to grow out of the black holes with a mass of about ten to one hundred times greater than our Sun is probably in the collapse of a massive star.

These “germ” of black holes then grow by merging with other small black holes and drawing the gas from their surroundings. The problem is that they would have to grow with extremely high speed in order to reach the mass of a supermassive black hole.

New data confirms a different scenario where at least some very massive nuclei black hole “weighs” 100 thousand solar masses, are formed directly during the collapse of massive clouds of gas. In this case the black holes are initially very large and then will grow more quickly (a large mass helps to attract a larger number of substances, but the process itself needs to be slower than in the case of small “embryos”).

“There was much dispute over which way were black holes,” says study co-author Andrea Ferrara (Andrea Ferrara). – Our work assumes that we agree that black holes “start with more” and are growing at normal speed but not start small and grow at a very rapid pace”.

Andrea Graziano (Andrea Grazian), co-author of the scientific work of nacianceno Andalusian Institute of astrophysics explains: “the Germ of black holes was very difficult to find and confirm their detection is very difficult task. However, we think that our study found two of the best candidate known so far”.

However, even if both candidates are in the “germ” of black holes will be relevant to the theoretical predictions, further research is needed to confirm their true nature. And, according to astronomers, in order to fully distinguish between two theories of education, need to find more candidates in these objects the Universe.