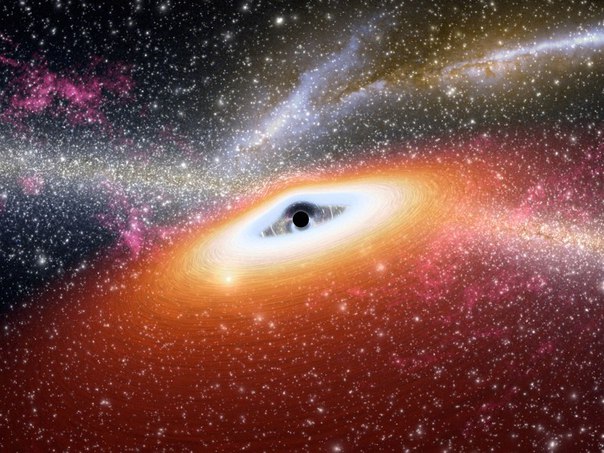 Black holes – this is perhaps the most indescribable objects in the universe: the concentration of such weight that it collapses, it follows from the general theory of relativity to the singularity at the center. Atoms, nuclei, and even the fundamental particles compressed into an infinitely small point of our three-dimensional space. Anything that falls into a black hole, is doomed to remain there until the end of time, captured by its gravity, which can not even leave the light. What fate awaits the dark matter in an encounter with a black hole?

Will it be sucked into the singularity, like ordinary matter, and will contribute to the mass of a black hole? If so, when a black hole will evaporate due to Hawking radiation, which is dark matter?

You should start with what is a black hole.

Here on Earth, if you want to send something into space, you need to overcome the gravitational attraction of the Earth. For our planet’s so-called escape velocity is about 11.2 km / s, it can be developed with the help of a rocket powerful enough. If we were on the surface of the sun, the escape velocity would be much greater, 55 times: 617.5 km / s. When our Sun dies, it will shrink to a white dwarf, which is the size of Earth, but the weight is two times lighter than the current Sun. It will escape velocity about 4570 km / s, which is about 1.5% of the speed of light.

This is important, because you focus more and more weight in a given region of space, and the escape velocity for that object more close to the speed of light. And as soon as your escape velocity on the surface of the object will reach or exceed the speed of light, not only the light will not be able to leave – as we understand matter, energy, space and time today – the whole object will be compressed in the singularity. The reason is simple: all the fundamental forces, including the forces that hold the atoms, protons or even quarks together, can not move faster than light. Therefore, if you are at a certain point of the central singularity and try to hold the remote object from the gravitational collapse, you can not; collapse is inevitable. And all that you need to overcome this barrier, a star more massive than the Sun at 20-40.

When at its core runs out of fuel, the center explodes under its own gravity, creating a cataclysmic supernova, swelling and destroying the outer layers, but leaving a black hole in the center. Such black holes grow over time, absorbing any matter and energy that gets too close. Even traveling at the speed of light, you can get into it and never leave the event horizon. Due to the curvature of the space inside the black hole, you inevitably get into the singularity at the center. When this happens, you will add a black hole energy.

Outside, we can not say from what originally was a black hole – from protons, electrons, neutrons, dark matter and antimatter in general. There are only three properties (so far) that we can see on the outside of the black hole: its mass, its electric charge and its angular momentum, measure the rotational motion. Dark matter, as far as we know, has no electric charge, and other quantum properties (color charge, baryon number, lepton number, etc.), Which may or may not be preserved or destroyed, based on the information paradox of the black hole.

Because of how black holes are formed (as a result of explosion of supermassive stars) when they first formed, the black holes are 100% out of the ordinary (baryonic) matter and 0% of dark matter. Do not forget that dark matter only interacts gravitationally, in contrast to ordinary matter that interacts through gravitational forces, weak, electromagnetic and strong interactions. Yes, in large galaxies and their clusters are five times more dark matter than ordinary matter, but it is going into one big halo. In a typical galaxy is dark matter halo extends over a few million light years, spherically, in all directions, while ordinary matter concentrated in the disk, which occupies 0.01% of the amount of dark matter.

Black holes are usually formed within the galaxy, where ordinary matter completely dominates the dark matter. Imagine a region of space in which we find ourselves: around our sun. If we draw a sphere in 100 a. e. (ae -.. is the distance from the Earth to the Sun) around our solar system, we will conclude all the planets, moons, asteroids and all the Kuiper belt, but the baryon mass – ordinary matter – encased in our industry, will for the most part provided Sun and weigh about 2 x 1030 kg. On the other hand, the total amount of dark matter in the same field will be only 1 x 1019 kg, or 0.0000000005% of the mass of ordinary matter in the same region, an equal weight of a modest-sized asteroid Juno, about 200 kilometers across.

Over time, dark matter and ordinary matter will be faced with this black hole, absorbing and added to its weight. Most supply growth will come from ordinary matter, not dark, but at some point, after many years in the future quadrillion, black hole decay rate finally surpass the rate of growth of the black hole. Process Hawking radiation will cause particles and photons that are output from the black hole event horizon, while maintaining all of the energy and angular momentum charge subsurface black hole. This process will take about 1067 years (the solar mass black holes) to 10,100 years (for the most massive black holes).

This means that some dark matter out of the black holes, but it will be completely different from the volume of dark matter, which fell into a black hole initially. All black holes have a memory of things that were in it, in the form of a small set of quantum numbers, and that the amount of dark matter in them is not included (remember, it does not have all the characteristics of the quantum?). The output is not what it was at the entrance.

Thus, dark matter is another food source for black holes, and not the best. Moreover, it is quite uninteresting food source. It has virtually no effect on the black holes.