How did the first black holes in the universe 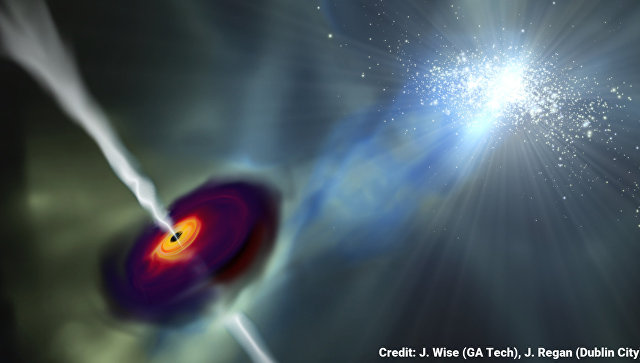 The first giant black holes grew at an ultrafast pace thanks to the “help” of neighboring galaxies, whose radiation did not allow stars to form inside the “germs” of the future giants of the universe.

“The collapse of the galaxy and the formation of a black hole with a mass of a million Suns, then, take place in just 100,000 years, a moment by cosmic standards.In several million years it grows to a mass of a billion Suns, which is noticeably faster than we expected to see, Said Zoltan Haiman of the University of Columbia in New York (USA).

It is believed that the center of most massive galaxies are inhabited by supermassive black holes, whose mass can be from a million to billions of solar masses. The reasons for the formation of these objects are not yet completely clear. Initially, scientists believed that such objects arose the same way as their “normal” cousins ​​- as a result of the gravitational collapse of stars and the subsequent fusion of several large black holes.

Observations of the first galaxies of the Universe forced astrophysicists to doubt this – it turned out that they contain black holes with a mass of tens of billions of Suns. Similar objects, as calculations show, simply would not have time to grow to such a size, if they were born small. Therefore, some scientists began to believe that supermassive black holes are born from more exotic scenarios – as a result of the collapse of giant clouds of “pure” atomic hydrogen or because of the presence of dark matter clusters in them.

Hyman and his colleagues proposed another unusual scenario for the birth of the largest black holes in the universe, the key role in which is played not by their “embryos”, but by their cosmic neighbors – other large galaxies.

The main obstacle to the growth of black holes, according to Hyman, are the stars, or rather the process of their formation. When black holes begin to grow, clumps of matter, nebulae, arise in their “germ”, where dozens and hundreds of stars are born. Stars are much more resistant to the attraction of a black hole, so that its growth stops virtually in itself.

The process of formation of stars can be stopped if at the moment when the “germ” of the black hole is compressed, the hydrogen molecules in it will be split into individual atoms or ions. A similar, as suggested by Hyman and his colleagues, can be accomplished by a fairly large galaxy with a significant number of young stars producing a large number of X-rays and ultraviolet.

Scientists have tested this idea, creating a computer model of the early universe populated by the first galaxies and embryos of black holes. As shown by their calculations, large galaxies can really accelerate the growth of black holes in their “neighbors”, if they are located at a certain distance from them and have the correct mass and brightness. Then the gas in the neighboring galaxies breaks up into atoms, but it does not heat up so much that the galaxy simply breaks up into pieces without forming a black hole.

All these calculations, as the scientists emphasize, do not exclude alternative scenarios for the formation of the largest black holes in the universe. Hyman and his colleagues hope that the launch of the James Webb telescope, the world’s largest orbiting telescope, will help to see these early galaxies and understand whether they really helped the black holes to grow or their formation was on some other path.