How did the oceans come from liquid water on Mars 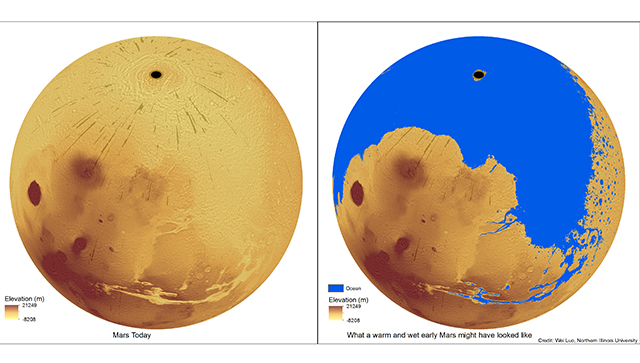 Oceans from liquid water could appear on the surface of Mars not as a result of volcanic eruptions or falls of asteroids, but exotic explosions of “frozen” methane deposits inside the ice.

“In order to melt the oceans of Mars, you need a relatively small amount of methane clathrates, whose thickness, if distributed over the entire surface of the planet, will be less than that of an ordinary dish, their explosion and release of methane into the atmosphere would be enough to raise the temperature on Mars for tens of degrees for about a million years, “- said Edwin Kite (Edwin Kite) from the University of Chicago (USA).

The discovery of traces of the most powerful oceanic tsunami on Mars, as well as some other data on its geology, make many scientists believe that liquid water could exist on Mars not always, but occasionally, when large meteorites fell on Mars or when its volcanoes melted melting the ice that surrounded them . Streams of such meltwater could break through the giant channels on the surface of Mars and form temporary oceans and lakes that did not freeze hundreds of thousands and millions of years.

One of the main problems of these theories, as Kite notes, is that such events can not produce oceans from liquid water that would exist long enough for Mars to appear those tracks that were found by satellites in orbit and rovers on the surface of the planet. Many scientists believed that their presence can be explained by unusually long series of eruptions or falls of asteroids, which, according to Kait and his colleagues, is an extremely unlikely thing.

Kite and his colleagues analyzed all the information we know about the geology and climate of Mars and came to the conclusion that relatively permanent reservoirs on its surface could have existed long enough due to two things: abrupt changes in the inclination of the rotation axis and unusual explosions on its surface.

This idea was prompted by the fact that today it periodically occurs in the circumpolar regions of the Earth. As Kite explains, at the bottom of the seas in the Russian and Canadian Arctic there are huge reserves of “frozen” methane, the deposits of the so-called clathrates that formed there at the time when the whole of the north of the earth was covered with an ice cap.

When this cap disappeared and the temperatures of the water and soil increased, these deposits lost stability, which in the recent past led to a series of powerful explosions that liberated huge amounts of methane, the strongest greenhouse gas, into the atmosphere of the planet. Something similar, scientists believe, could have happened on Mars.

Calculations by Kait and his colleagues show that even a relatively small amount of gas released during such explosions had to completely melt the oceans and lakes of Mars and keep them in a liquid state for about 100,000 – million years. This would well explain the traces of the existence of rivers and lakes that were recently found in sediments of those eras when Mars was supposedly already completely dry and cold.

This idea, as the planetologist notes, can be checked right now, thanks to the tools of the Russian-European probe “ExoMars-TGO”, who arrived to Mars in October last year. It is equipped with a NOMAD instrument capable of detecting even small concentrations of methane in the atmosphere, and their discovery will indicate whether there are deposits of clathrates on Mars or not, Kite concludes.