How does Voyager travel? 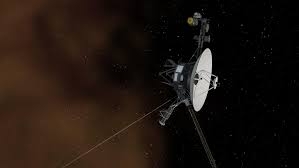 The music, created entirely from the data that the Voyager 1 spacecraft sent to Earth, can be heard at the NASA booth at the ACM / IEEE Supercomputer Conference in Denver, Colorado, at 8 pm local time on Monday, November 13.

Created to celebrate the fortieth birthday of Voyager 1, the three-minute tune is based on information recorded by his instrument for studying low-energy charged particles, a special telescope designed to distinguish between protons, alpha particles and heavy nuclei in space.

An excerpt from the melody.

Each digit received by the Station for processing space physics data from 1977 to last week was turned into a musical note. The result was a melody that accurately reflects the entire journey of the spacecraft.
To create music, Domenico Vysinanza of the University of Englius Raskin (Great Britain) and Genevieve Williams of Exeter University (Great Britain) used a process called data sonification. They managed to translate the aerodynamic characteristics into a melody and various arrangements. The main melody – sonification of cosmic ray pulses – is played by the second violins before the broadcast of the 2012 data, and then – by a flute, piccolo and bells. Pianos and French horns duplicate violins during meetings with Jupiter and Saturn, emphasizing the rise and fall of pulses of cosmic rays at the entrance and exit of the apparatus from the atmospheres of the planets. The transition from the heliosphere to interstellar space is accompanied by changes in arrangement and harmony, as well as in changing the musical key (key) from majeure to m flat major.

Vishnanza says: “Our melody is not just inspired by one of the most successful space missions of all time, it is formed by the incredible journey of Voyager.” Sonification of information can play an important role in popularizing scientific discoveries, and we hope that turning 40 years of data into music will help listeners hear all aspects of the Voyager 1 journey, which may not be so obvious if you look at the charts. “