How fast the universe is expanding 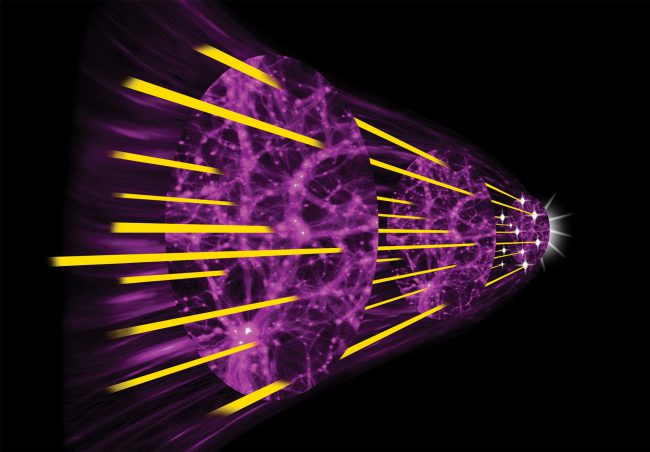 Once we discovered that the universe is expanding. After that, the next scientific step was to determine the speed or pace of this expansion. It took more than 80 years, but we still have not agreed on this issue. Looking at the largest cosmic scales and studying the oldest signals — the afterglow of the Big Bang and the large-scale correlations of galaxies — we got one number: 67 km/s/MPC.

But looking at individual stars, galaxies, supernovas and other direct pointers, we get another number: 74 km/s/MPC. Uncertainty is very small: ±1 to the first number and ±2 for the second number, and it remains a statistical chance of less than 0.1% that these numbers will be reconciled with each other. This contradiction had to be resolved for a long time, but stubbornly held ever since it was first discovered the expansion of the Universe.

In 1923, Edwin Hubble used the largest telescope to look for new stars in other galaxies. Probably shouldn’t say “galaxy”, because then humanity would not be sure in heavenly spirals. Studying the largest of them — M31, now known as the Andromeda galaxy, he saw the first and then second and third new. But the fourth appeared in the same location as the first, but it was impossible, because the new reload centuries or more. It’s a new one in less than a week. Worrying about a Hubble crossed out the first “N” that I wrote on top and wrote “VAR!”. He realized that it was a variable star (variable), and since then appeared in physics of variable stars. The Hubble was able to calculate the distance to Andromeda. He showed that it was exactly outside of the milky Way and is obviously a galaxy. It was the most beautiful observation is the only star in the history of astronomy. 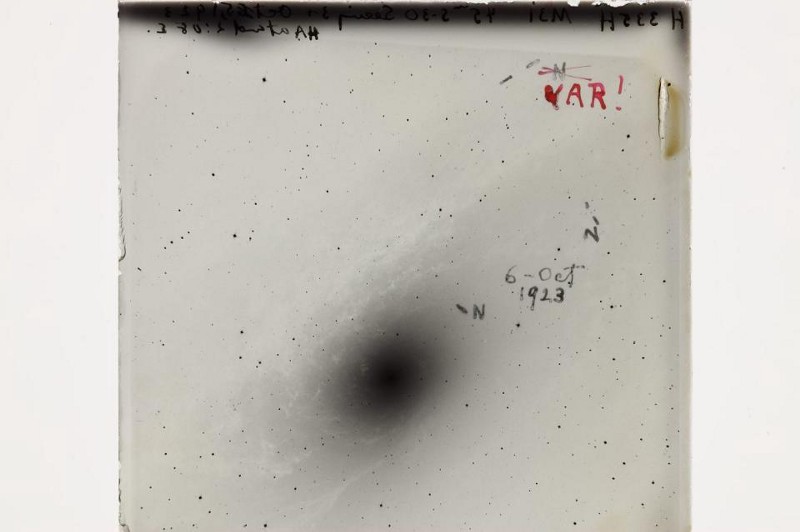 The original record of Edwin Hubble, revealing the variable nature of the stars in Andromeda.

Hubble continued his work, watching variable stars in many spiral galaxies. Along with their spectral lines shifted, he began to notice that the farther a galaxy is, the faster it is removed from us. He not only opened this law is known as Hubble law — he was the first who measured the expansion rate: the Hubble parameter. Received them the number was, however, large. Very large. So large that if it were true, it would follow that the Big Bang was only two billion years ago. Obviously, no one would have believed it, because we have geological evidence that the Earth is over four billion years. 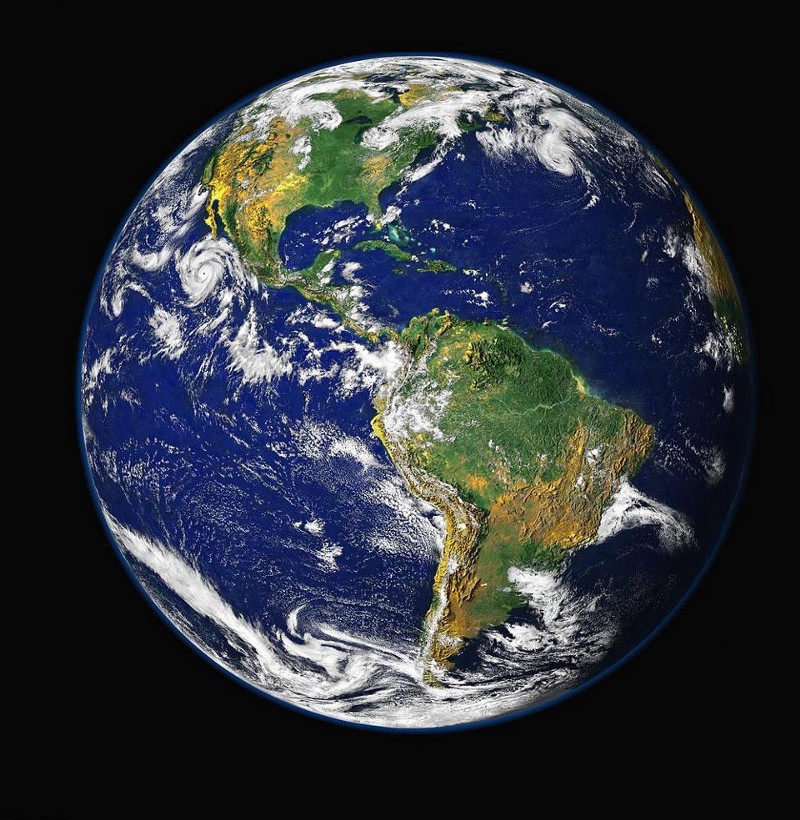 Composite image of the Western hemisphere of the Earth in 4 billion years.

In 1943, astronomer Walter Baade watched variable stars outside of the milky Way and noticed something incredibly important: not all variables Cepheids — the type that Hubble used to determine the expansion of the Universe — behave the same way. Instead, they were two different classes. And suddenly it turned out that the Hubble constant was not as big as decided by the Hubble. 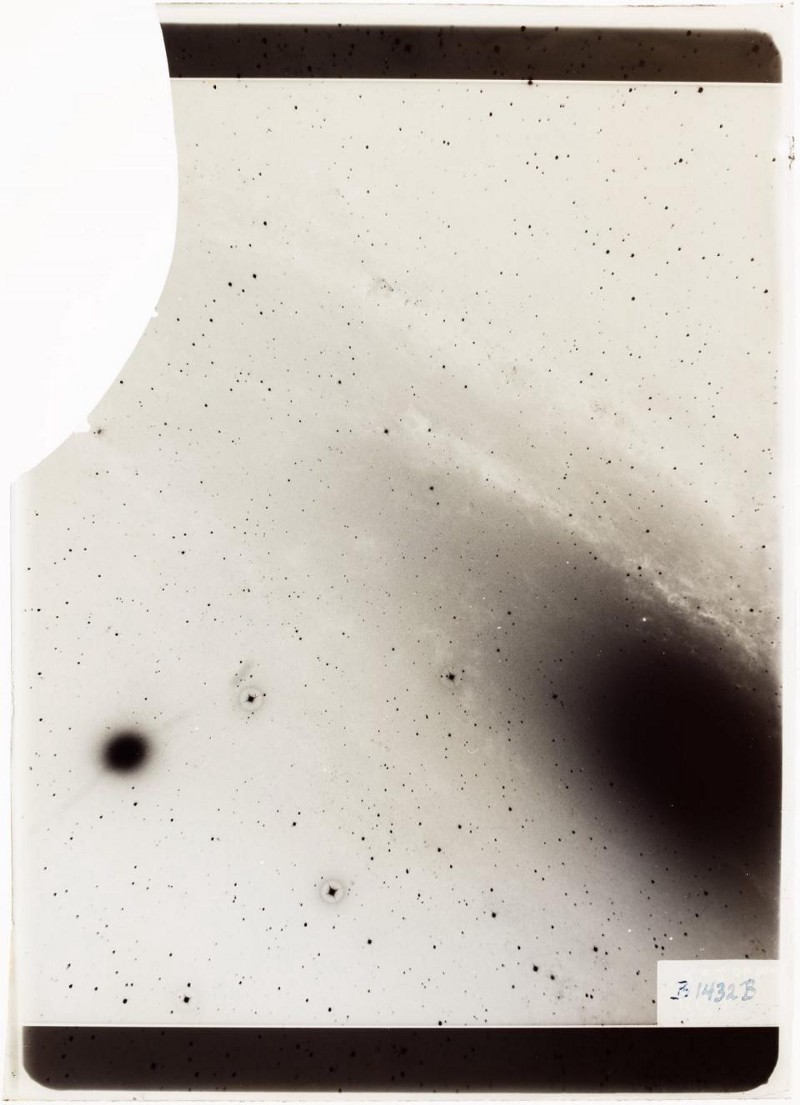 Measurements of variable stars Walter Baade in Andromeda was the most important proof of the existence of two distinct populations of Cepheids and helped to reduce the Hubble parameter to a more meaningful value.

Instead, the universe expanded more slowly, and therefore she needed more time to reach the current state. The universe for the first time surpassed the Earth age, and this was a good sign. Over time, further clarification was growing, and the rate of the Hubble gradually decreased, while the age of the Universe has continued to grow. Ultimately, the age of even the oldest stars drowned in the age of the Universe. 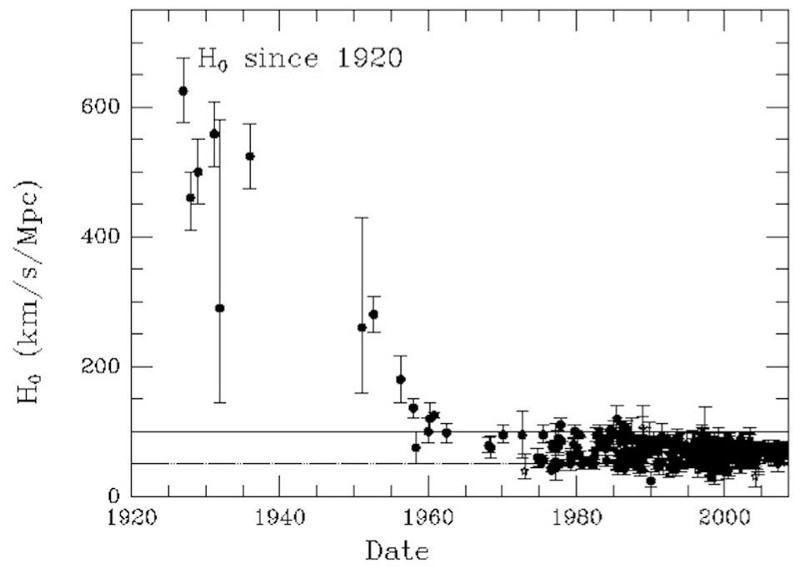 How to change the rating of the Hubble parameter with time.

The story does not end there. Do you know why the Hubble space telescope named so? Not because it was named after Edwin Hubble, who discovered that the universe is expanding. Rather, because his main mission was to measure the Hubble parameter, or the rate at which the universe is expanding. Before the launch of the telescope in 1990, there were two camps advocating completely different worlds: one under the leadership of Allan Sandidge and the Universe the rate of expansion of 50 km/s/MPK, and the age at 16 billion years, the other under the leadership of Gerard de wokulira and the Universe the rate of expansion of 100 km/s/MPK and age at 10 billion years. These two camps were confident that the opposite camp commit systematic errors in their measurements, and that there is no middle ground. The main scientific goals of the Hubble space telescope was to measure the rate of expansion once and for all.

And he achieved it. 72 ± 8 km/s/MPK was the final result of the project. Today mistakes or errors even less, and the voltage between the two different methods. If you look at the Universe on the largest scales, the fluctuations in the cosmic microwave background and baryon acoustic oscillations in the clustering of galaxies, you will receive a number smaller: 67 km/s/MPC. It is not the most favorable results, but larger values are quite possible.

If you look at direct measurements of individual stars in our galaxy, and then on the same classes of stars in other galaxies, then supernovae moreover, you will get a higher value of 74 km/s/MPC. But a systematic error in the measurements of the nearest stars, even an error of a few percent could significantly reduce this number even to the lowest suggested values. As soon as the mission Gaia of the ESA continues to measure parallax with unprecedented precision one billion stars in our galaxy, this tension can be resolved by itself.

Today we know the expansion rate of the Hubble fairly accurate and two different methods of its extraction, seem to provide conflicting values. Right now is leaking a lot of different dimensions, each camp tries to prove his innocence and to find the mistakes of another. And if history is either taught, we can say that we, first, learn something new and interesting about the nature of our Universe, when the matter will be resolved, and secondly, the dispute on the subject of the rate of expansion will clearly not be the last.