How the mystical “crowns” of Venus appeared 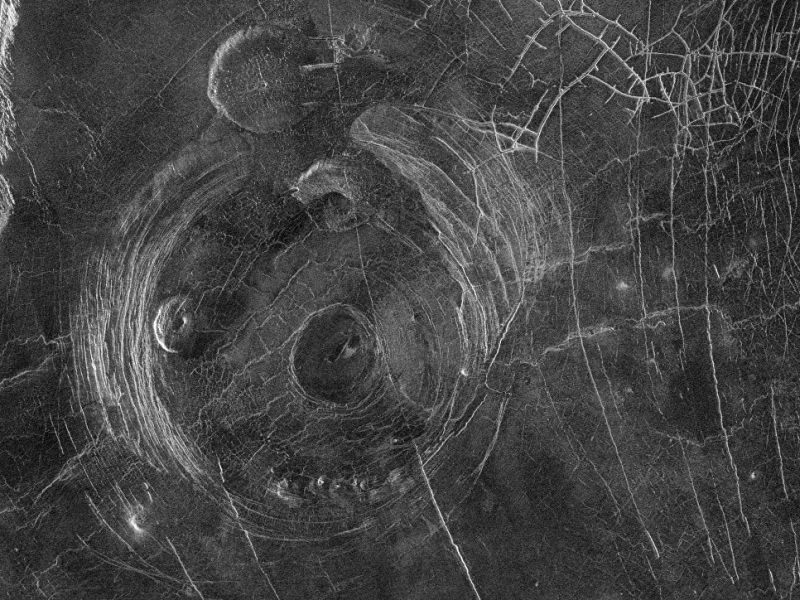 For a long time scientists believed that the geological activity on Venus ceased 300-600 million years ago. However, in 1983, unique plateaus were discovered on the surface of the planet, known as “crowns” – circular formations, with a large number of cracks and faults, which resemble the “view of the crown from above.”

The scientists came to the conclusion that “crowns” are not just unique elements of Venus, but proof that the planet is much more active than previously thought. Physicists believe that this is the result of the action of streams of hot rocks, called “plumes”: they rise above the mantle and reach the surface of Venus, and then return back, leaving behind a funnel with a depression in the center.

To confirm their guesses, Anne Davaille, a physicist at the University of Paris-Saclay and her team conducted a series of experiments using a reduced model of the planet. They filled the glass mock-ups with a suspension of silicon particles, similar in composition to the interior of Venus. Scientists heated and dried the liquid, simulating the appearance and disappearance of plumes. Tests showed that hot currents rose from the lower layer of the planet, and then settled on the surface, destroying the hard surface. Thus, fragments of the cortex drowned inside the mantle because of its high density.

Anna Davay and her colleagues believe that not only the “crowns”, but also the numerous cracks that cover the surface of Venus, are the consequence of this process.

By the way, of all the planets of our solar system, Venus is most similar to the Earth in size, mass and chemical composition. But if on the Earth “various forms of life appeared, Venus turned out to be hell for all living things. In its atmosphere clouds of sulfuric acid fly, and the surface is so hot that it can melt lead. Anna Davai believes that after studying the reason for the appearance of “crowns”, scientists can finally understand how rocky planets originated, including the Earth.