How, why and why they occur forest fires 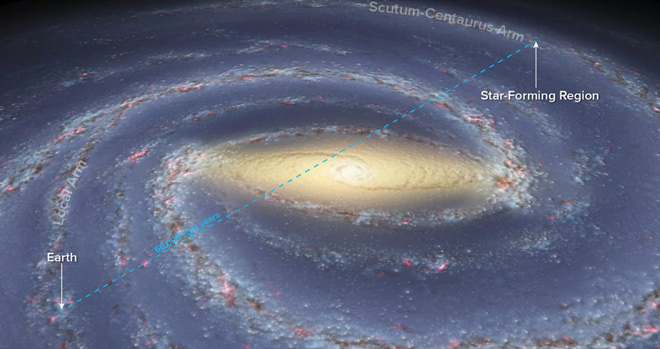 The scientists used a system of 10 radio telescopes in New Mexico called the Very Long Baseline Array (VLBA) to determine the distance to the bright star-forming region on the opposite side of the Milky Way. The obtained value is almost double the record distance measured earlier in our Galaxy.

Humanity managed to find objects at a distance of 13.3 billion light years, at the very edge of the observed universe. One light-year is the distance that light travels in a year, about 10 trillion kilometers. So why is it so difficult to measure the distance to objects across the Milky Way, which is only 100,000 light-years away?

The reason is related to the location of the observer. Our Solar System is located about halfway from the edge of the Galaxy to its center, on one of the massive spiral arms, so the only viewpoint we have in the Milky Way is on the sidelines. It’s like trying to map the forest in which you are by measuring the distances between the trees around you. In addition, you can not walk in these “forests”, because the Earth, on the scale of the Galaxy and human life, is not moving so fast to open another perspective to the Earthman. That’s why the constellations for us look like they looked thousands of years ago.

Dust, gas and stars in the galactic disk obscure distant objects from us in the same way as trees in the forest hide behind each other, according to the report of the National Radio Astronomy Observatory (NRAO). But we can turn around to see more individual trees around us and see how the visible picture changes. This phenomenon is called parallax, it causes your finger to “jump” when you hold it in front of your nose and look at it alternately with one or the other eye.

According to Tom Dame, a researcher at the Harvard-Smithsonian Center for Astrophysics in Massachusetts and co-author of the new work, most distances in astronomy are extrapolated based on data on the brightness of different objects. Often scientists have to use one distance for calibration to measure the distance to the object located further, and repeat this process many times. But the use of parallax eliminates this dependence on knowledge of other objects. “Parallax is miraculously straightforward and based only on trigonometry,” notes Dame.

The team used this method to measure the distance to the star formation region called G007.47 + 00.05 on the opposite side of the Milky Way. With the help of telescopes VLBA, scientists measured the apparent shift of the region in the sky, if viewed from opposite points in the Earth’s orbit around the Sun.

The resulting jump was approximately equal to the angle that would have been obtained by observing the ball on the Moon from the surface of the Earth, which corresponds to a distance of more than 66,500 light-years. Previous record distances, measured with parallax, were about 36,000 light years.

“Most of the stars and gas in our Galaxy are at this new measured distance from the Sun,” Alberto Sanna, lead author of the study at the Institute of Radio Astronomy, Max Planck. “With VLBA, we can now measure a sufficient distance to accurately trace the spiral arms of the Galaxy and learn their true forms.”

Object G007.47 + 00.05 is a powerful source of microwaves that pass through dust and gas relatively undistorted. The incredible brightness of the region is due to the fact that the molecules resonate and enhance the light of a young massive star located nearby. The system works like a microwave laser, called a maser. “In this case, we were on the right along the ray,” Dame explains.

The study was part of a larger five-year project called the Bar and Spiral Structure Legacy Survey (BeSSeL), which aims to map the far side of the Milky Way using parallax measurements of these maser sources. “Over the next 10 years, we need to get a fairly complete picture,” said Mark Reid, head of the BeSSeL team.