How will the search for life on Mars change after the discovery of the lake? 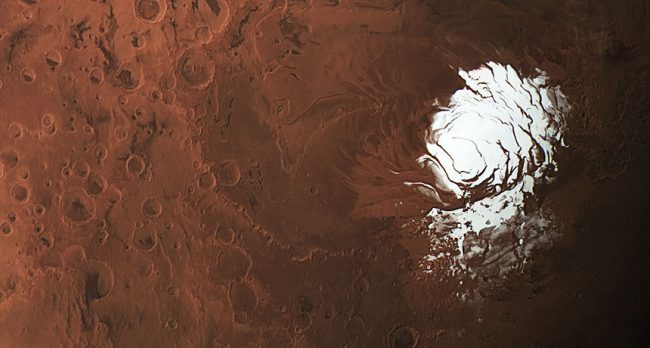 Last week, the search for life on Mars became more interesting. For decades, scientists peered into the red deserts of this dry and dusty planet, trying to identify areas in which billions of years ago life could take root when the Martian climate was warm and humid. But on July 25, scientists announced that they had found evidence of a large lake with liquid water under a thick layer of ice near the south pole of the planet.

If the existence of the lake is confirmed, it is possible that in it we will find microbes.

In general, this finding has changed the attitude of astrobiologists who want to protect any existing extraterrestrial life from the destruction of accidentally introduced species from the Earth. Mars and descent are cleaned to strict standards to avoid any possible glare, says astrobiologist Lisa Pratt of the NASA Planetary Defense Department. “A possible ice lake! This significantly changes the type of environment that we are trying to protect. ”

How will the search for life on Mars change after the discovery of the lake?

First question. Can anyone really live in this lake?

“It’s very cold, colder than in any environment on Earth, where in our opinion life can exist or be reproduced,” Pratt says.

The lake contains a lot of water. But that the water remains liquid at such a low temperature, it must be extremely salty. “On Earth, this kind of salty mixture does not let living organisms live,” says planetologist Jim Bell of the University of Arizona in Tempe. “Even extremophile bacteria that can live in salt water may not survive.”

Can the Martians live there?

If life originated on Mars in the past, when the planet was friendlier, some organisms could adapt to climate change and safely continue to dwell in cold salt water, she says. “As for me, this is an ideal shelter in which you can just be, maybe, dozing and waiting until the conditions on the surface become better.

How does this lake differ from other reservoirs in which we hope to find life, like those on Enceladus?

For explorers of the planets, Mars has one big advantage over other icy moons of Saturn and Jupiter: we’ve already visited it. To get to Mars can be relatively quickly, in just 4-11 months, and the atmosphere of the planet simplifies landing, unlike small airless moons.

The big question for planetary protection is whether the lake of Mars is in contact with the surface. On Enceladus and, perhaps, in Europe, the liquid water of the subsurface ocean splashes into the sky through cracks in the ice. These geysers can greatly simplify the sampling of the ocean: the spacecraft will fly enough through it. But the fact that the water goes out means that the microbes can move freely.

Although near the lake on Mars has not yet landed spacecraft, dust storms can carry pollution around the planet.

“If the lake is real, let’s hope that passengers have not penetrated it,” Pratt says.

If there is no way to get into or out of the lake, how do we know that there is life in it?

This is a big question.

To check the lake for signs of life, “you need to drill to it” the way, says Isaac Smith of the Institute of Planetary Sciences in Lakewood, Colorado. This is how scientists sound similar ice lakes on the Earth, like Lake Vostok, which scientists from Russia drilled in 2012. Then they said that the lake lives an active life, but later recognized that the samples were contaminated.

Drilling on Mars can be more technically challenging and run into pressure from the scientific community, as is the case with the team from Russia. “Like the subglacial lakes in Antarctica, the lake of Mars can be considered an unusually rare and special place,” says Pratt. “I expect that drilling will meet a lot of resistance.”

But if we are lucky, we can do without it. Signs of seasonal changes in methane content in the Martian atmosphere aroused interest in astrobiologists, since they can indicate life under the surface. ExoMars, the apparatus of the European Space Agency and Roscosmos, which began collecting data in April, is looking for more methane.

“ExoMars could find smoke, so to speak,” says planetologist Roberto Orosei of the National Institute of Astrophysics in Bologna, Italy, who was on the team that opened the lake. “The combination of liquid water and methane in the atmosphere would be an eloquent testimony to what is happening on Mars.”