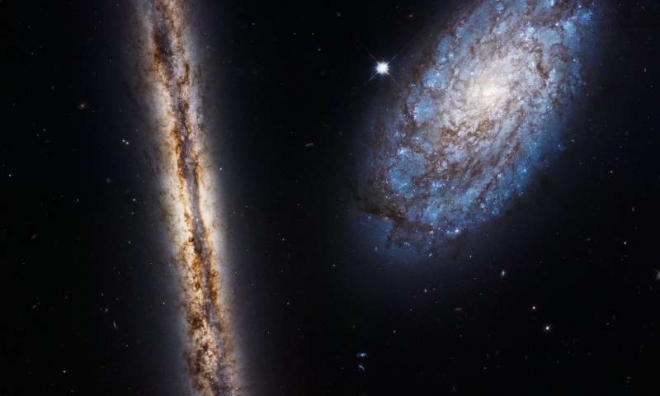 A stunning snapshot of two very different spiral galaxies NGC 4302 and NGC 4298 was made by the Hubble Space Telescope. This image, published to the 27th anniversary of the telescope, brilliantly reproduces their warm starlight and mottled brown dust structures.

Since its launch on April 24, 1990, the Hubble has been nothing more than a revolution in astronomy. The first-of-its-kind orbiter for 27 years revealed to scientists and society all the new wonders of the cosmos.

ESA and NASA annually celebrate Hubble’s birthday with the publication of the best space images. This time in a jubilee photo shows a pair of spiral galaxies NGC 4302 and NGC 4298, which are located 55 million light-years in the northern constellation of Hair Veronica. They were discovered by astronomer William Herschel in 1784 and are part of the Virgo cluster, consisting of approximately 2000 individual galaxies.

NGC 4302, captured from the side, is slightly smaller than our Galaxy. Tilted NGC 4298 is even smaller, almost twice as low as its companion.

At their closest points, galaxies are separated from each other in a projection of only 7,000 light years. Interestingly, with such a close arrangement between galaxies, there is no significant gravitational interaction-only a weak bridge of neutral gaseous hydrogen, which is not visible in the photo. Long tidal tails and deformations in their structure, typical of close to each other galaxies, are completely absent.

Astronomers have discovered a very weak tail of gas flowing from two galaxies in the direction from the center of the Virgo cluster. They assumed that the galactic twin had recently arrived in the cluster and is now moving toward the center where the massive Messier-87 galaxy lies. In their journey, two galaxies collide with hot gas – an intracluster medium – which acts as a strong wind blowing layers of gas and dust from Galaxies, forming a tail.

Even at the 27th year of its existence, the telescope continues to present truly fascinating cosmic images. Astronomers expect that Hubble and his successor James Webb telescope will work simultaneously, using a combination of their capabilities to study the universe.