“Hubble” for the first time photographed the supernova, enlarged “lens of Einstein” 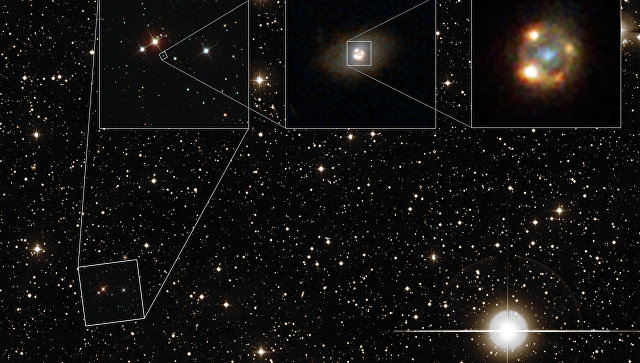 “Hubble” was the first to photograph a supernova explosion in a distant galaxy, stretched in time, magnified and “multiplied” by a gravitational lens.

“I was looking for an” enlarged “supernova for about 15 years, I applied to all the reviews, used a variety of methods to search for them, and actually gave up.” This result was a big surprise for me. “Gravitational lenses are interesting for me primarily because, That they allow us to study the structure of matter, visible and dark, on scales that otherwise can not be achieved, “said Ariel Goobar of the University of Stockholm, Sweden.

A cosmic candle in a magnifier

Any accumulation of dark or visible matter of large mass interacts with light and causes its rays to curl, just as conventional optical lenses do. This effect is called gravitational lensing. In some cases, the curvature of space helps astronomers see ultra-distant objects – the first galaxies of the universe and their quasar kernels – that would be unavailable for observation from the Earth without a gravitational “increase”.

If two quasars, galaxies or other objects are located one after another for observers on Earth, an interesting thing arises – the light of a farther object will split as it passes through the gravitational lens of the first. Because of this, we will see not two, but five bright points, four of which will be light “copies” of a more distant object.

A similar structure is often called the “Einstein Cross” because its existence is predicted by the theory of relativity. Most importantly, the same theory says that each copy of the object will be a “photograph” of a quasar, galaxy or supernova at different periods of their life because their light has spent a different amount of time on the way out of the gravitational lens.

Gubar and his colleagues managed to find a rare object of this type – an “enlarged” supernova of the first type, studying the data collected by the PTF automatic telescope at the Palomar Observatory, designed specifically for “hunting” for supernovas.

Initially, according to Gubar, no one considered the supernova iPTF16geu special – the scientists assumed that it was the usual explosion of a pair of merged white dwarfs that occurred a billion light years from the Earth.

When the authors of the article studied its spectrum, they found that in fact it was not so – iPTF16geu is located 4.3 billion light years from Earth, and its light was magnified 52 times and “multiplied” by the gravitational lens of the galaxy located halfway Between the ancestor of iPTF16geu and our planet.

This discovery, according to the scientist, is especially important for the reason that supernovae of the first type explode in the same scenario and have the same physical parameters, so they are now used as a kind of “ruler” for estimating distances to distant objects.

The discovery of iPTF16geu, thus, allows scientists to accurately measure the distance to the ancient and distant galaxy where it was born, and to understand how the properties of space-time have changed over the time that has passed since the moment of its explosion. Today, many cosmologists are beginning to think that the early Universe could be governed by several other physical laws, and older “enlarged” supernovae like iPTF16geu can help us verify this.

For example, now Gubar and his colleagues calculate the time that the light from every “copy” of the supernova spends on a journey to Earth. These data will help them very accurately measure the so-called Hubble constant – the speed with which the universe expands, and compare it with the rate of growth of the universe in the first epochs after the Big Bang.