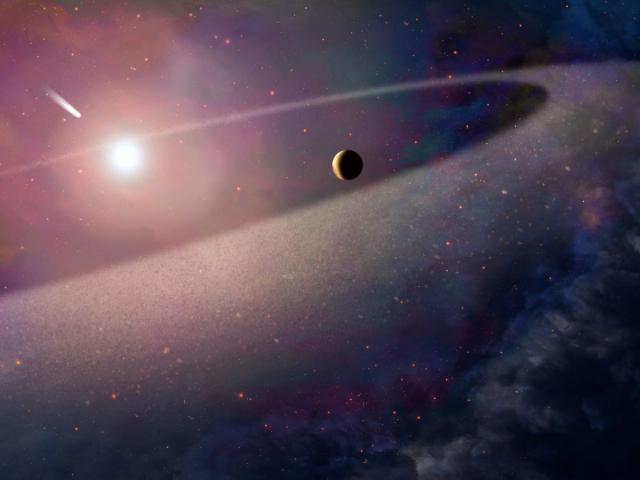 Space telescope Hubble found evidence for the existence of the analogue to the Kuiper belt around a white dwarf WD 1425 540, which is from us at a distance of about 170 light-years away in the constellation of Bootes.

Studying the atmosphere of the white dwarf by the Hubble space telescope and a telescope, the Keck Observatory, scientists have found evidence of falling to the massive star, like a comet, object.

Researchers have determined that this celestial body in its chemical composition resembled Halley’s comet, but it was 100 thousand times more massive, it had the same ratio of water as Halley’s comet.

Spectral analysis showed that the object is rich in such essential for life elements as carbon, oxygen, sulfur and nitrogen. Interestingly, the first time scientists were able to detect the presence of nitrogen in the fragments of a celestial body falling onto the white dwarf. According to scientists, this object was more nitrogen than in any other celestial bodies observed in our Solar system.

Today there are more than a dozen white dwarfs, which fell asteroidstone objects, however, to date, scientists have not yet witnessed a drop in white dwarfs cometary celestial bodies. the Detection of such an object may indicate the existence of a belt of comet-like objects, which may resemble the Kuiper belt in the Solar system.

According to scientists, if the hypothesis that water, nitrogen, and carbon appeared on Earth in the bombing of comets, is correct, then the new discovery suggests the possible existence of other planetary systems that could obtain water, nitrogen and carbon in the same way.

As the researchers suggest, drawn WD 1425 540 object, probably, was originally located at the distance of more than 300.e. from a white dwarf before he began his fateful path to the star. Failure in the movement of comets could be caused by gravitational effects not yet discovered planets. It is also possible that the companion white dwarf G200-40 has an effect on in the analogue of Kuiper belt objects. It is possible that the change of the cometary orbit of the object could be related to these two factors.