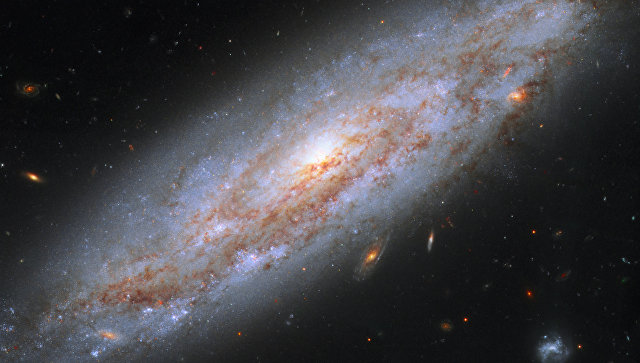 Orbital observatory “Hubble” received photos of a large galaxy NGC 3972 in the constellation Ursa Major, which we now see in the state in which it was at the time when the earth wandered the last dinosaurs, the website of the space telescope.

Most of the objects of the surrounding Universe are so far away from the Earth that we see them in a relatively recent or extremely distant past. For example, the Sun’s light spends about 8 minutes on a flight to our planet, and the radiance of distant galaxies is tens and hundreds of millions of years.

For this reason, many of the stars and other objects that we see today in the sky have in fact long since disappeared, exploded in the form of supernovae or turned into something else. A vivid example of this is the galaxy NGC 3972, one of the closest neighbors of the Milky Way.

It is located in the constellation Ursa Major, about 65 million light-years from our Galaxy. For space, this is a relatively short distance, but by the standards of life on Earth it is huge – the light of NGC 3972, which has now reached Earth, left this galaxy at a time when dinosaurs and other representatives of the Mesozoic fauna lived on our planet.

This interesting feature of this galaxy scientists learned relatively recently, in 2011, when a supernova explosion that occurred near the center of NGC 3972, helped astronomers calculate the exact distance between the Earth and this star metropolis.

Now, as the scientific team of Hubble notes, this galaxy is an important part of the so-called “space ladder of distances”. It is a collection of high-precision measurements of distances between galaxies, which cosmologists are trying to use today to solve the main riddle of the universe – the speed with which it expands.

Today, there is no consensus among scientists on this subject due to the discrepancy in the data between the WMAP and Planck telescopes that studied the microwave “echo” of the Big Bang and images from Hubble and other telescopes that observed supernova explosions and special Cepheid variable stars .

As scientists hope, clarification and addition of the “distance ladder” will help to resolve this contradiction and to understand whether the anomalies in the rate of expansion of the Universe really indicate the existence of a “new physics” outside the Standard Model.