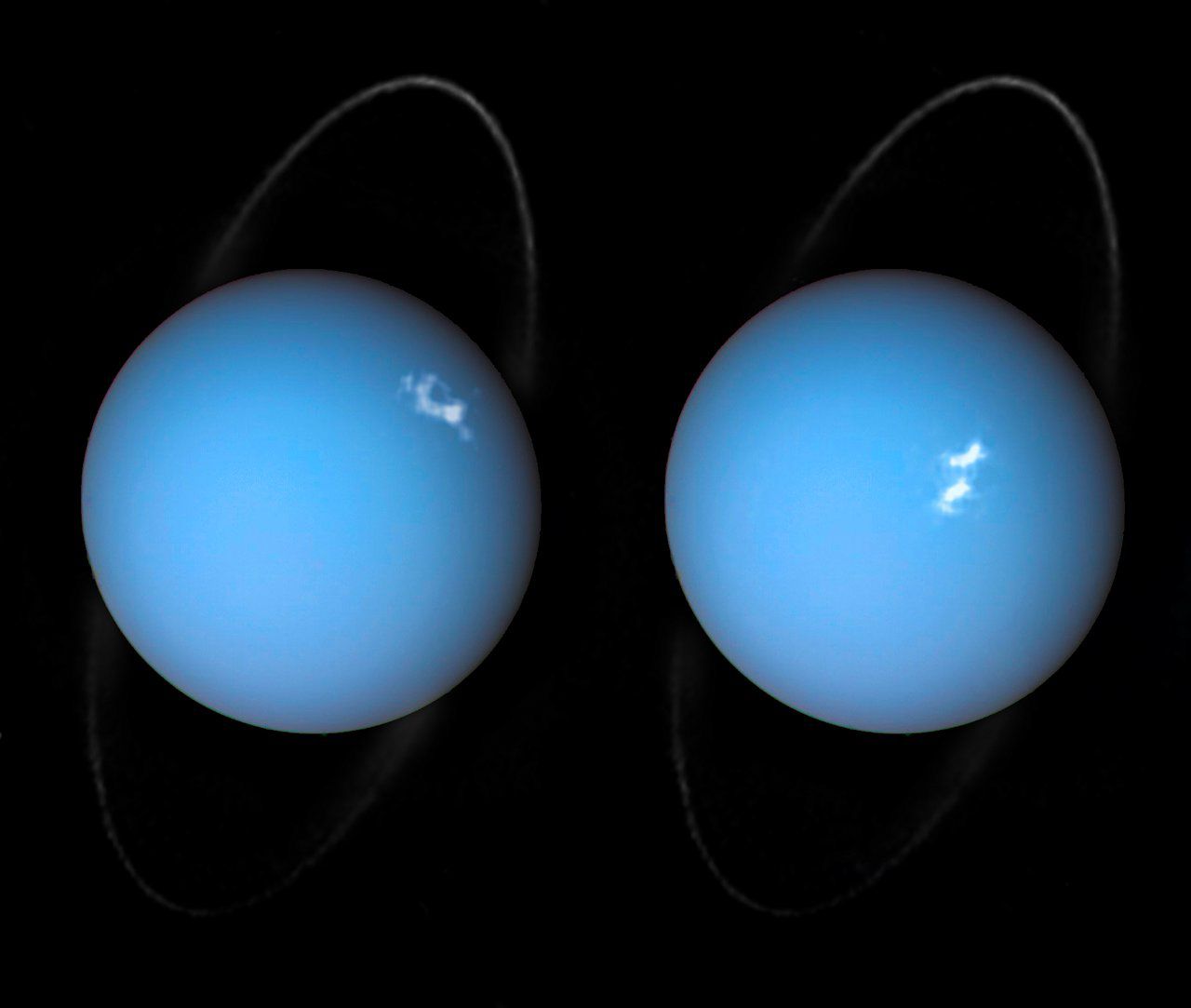 This composite image is an image obtained by applying a snapshot of Uranus taken with the Voyager 2 probe and two different images of the same planet made with the Hubble Space Telescope – one of which shows a ring around the planet, and The second – auroras over its surface.

Since the Voyager 2 probe transmitted spectacular images of the planets of the Solar System to the Earth in the 1980s, amateur astronomers began to search for these auroras with great passion on the surfaces of other planets. Aurorae appear as a result of the tunneling of charged particles, such as electrons, by magnetic fields to the poles of the planet, where they interact with molecules of atmospheric gases, exciting them. During the transition of the excited molecule to the ground state, a quantum of light is produced, observed collectively for particles of atmospheric gases as the glow of gas clouds in the circumpolar regions of the planet’s surface.

The auroras on Jupiter and Saturn have been fairly well studied, but fewer details are known about the auroras occurring on the surfaces of ice giants, such as Uranus. In 2011, the Hubble Space Telescope first recorded from the Earth’s orbit aurorae on Uranus. In 2012-2014 years. The team, led by an astronomer from the Paris Observatory, France, for the second time in the history of science observed these auroras with the aid of the Hubble tools for observations in the ultraviolet.

The researchers were able to consider and describe interplanetary shock waves caused by two powerful solar wind streams moving from the Sun to Uranus, and then to trace their effect on the auroras observed on the surface of Uranus. Scientists then recorded the most powerful aurorae ever observed on the surface of Uranus. Observing these events over time, scientists gathered the first direct evidence that these brightly shimmering areas rotate with the planet. In addition, the authors of the work reopened the “lost” magnetic poles of Uranus, the location of which escaped the attention of astronomers soon after they were first discovered with the aid of the Voyager 2 probe in 1986, due to uncertainties in the measurements and almost Devoid of significant landmarks of the planet’s surface.