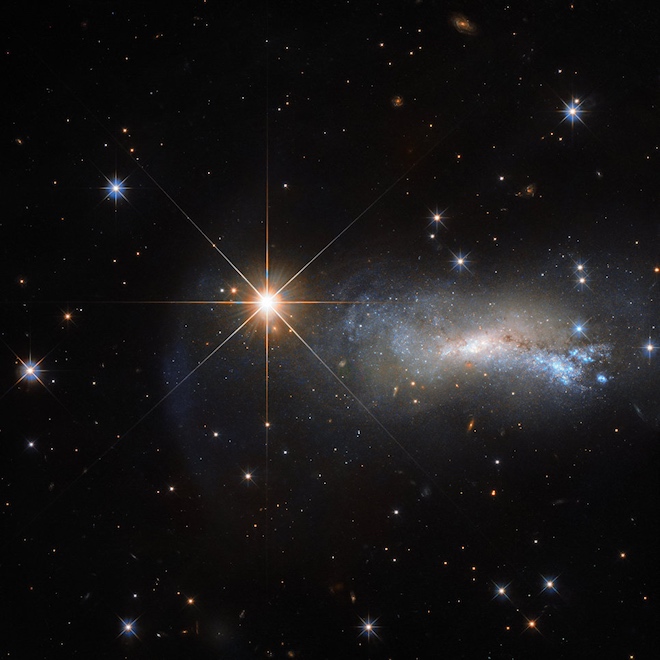 The star, which eclipsed the super-bright galaxy, photographed the Hubble Space Telescope. The light of TYC 3203-450-1 is so bright that it does not allow the emission of the galaxy NGC 7250 in the constellation Lizards to reach the Earth.

The fact is that TYC 3203-450-1 is located between our planet and the NGC 7250 galaxy undeservedly “hidden” from us. The star is much closer to the Earth – just a few dozen light years. Galaxy NGC 7250, which is one of the brightest objects in the Universe, is 45 million light-years away. Therefore, TYC 3203-450-1 can completely block the flow of its radiation.

This example perfectly illustrates how difficult it is for astronomers to determine distances to stars and other sources of radiation. To estimate the position of stars taking into account the three-dimensionality of outer space, several techniques are used.

One of them is the annual parallax method, according to which the star’s displacement relative to more distant objects is measured as the Earth rotates around the Sun. The minus of the method is that it works only for the closest stars that are located no further than 2–10 thousand light years from our planet.

The second method is the calculation of the distance to the object using variable stars – Cepheids. This method operates within the galaxy.

The third option is to use supernovae of the first type as “measuring instruments”. This way you can find out the distance to the stars in the Milky Way and the neighboring galaxies.

But usually all three methods are applied simultaneously. The two main devices that help scientists determine the distance to space objects are the Hubble telescope and the GAIA probe.