“Hubble” photographed a star that can destroy the Earth 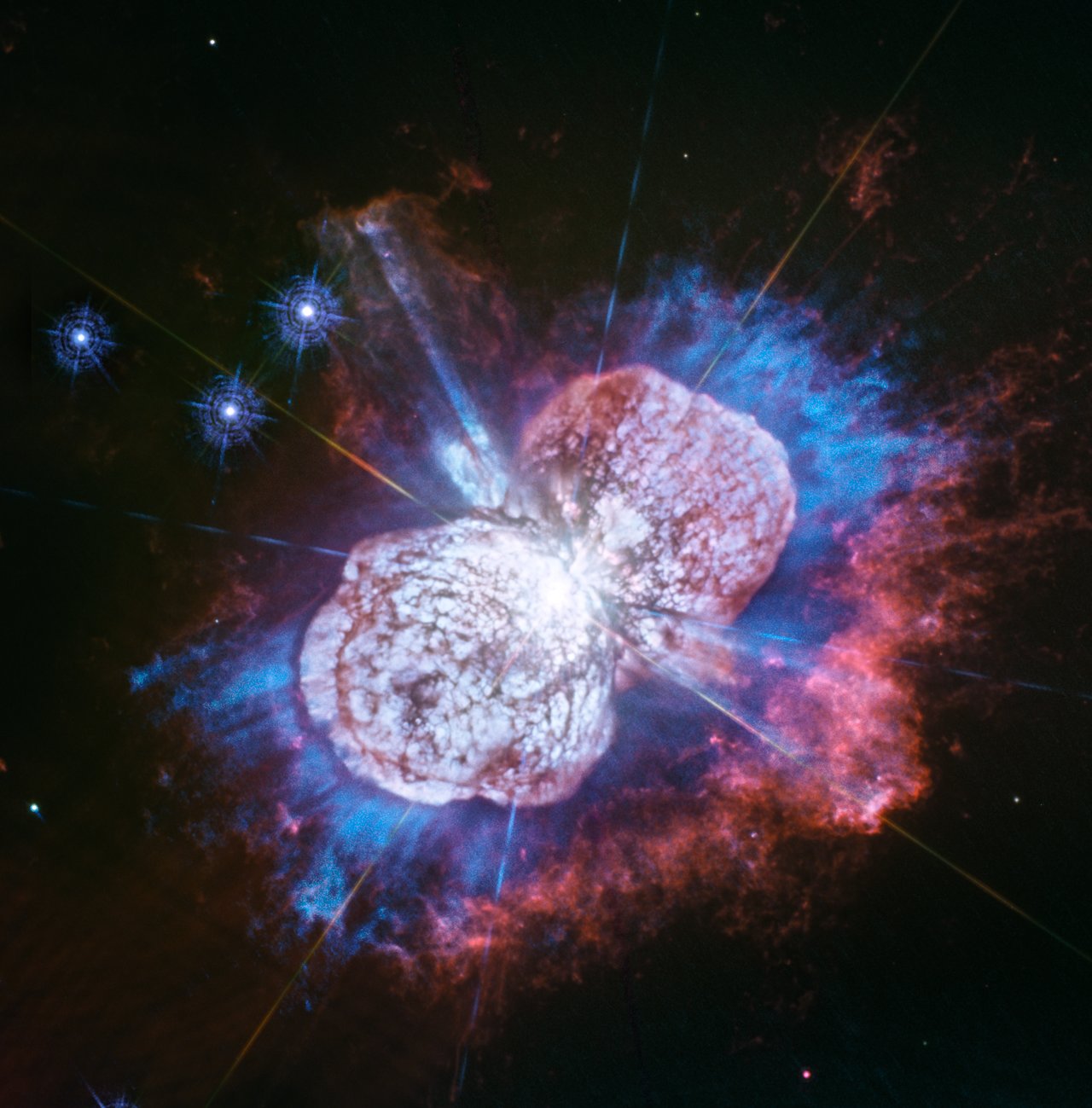 The Hubble Orbital Observatory received unique photographs of the largest star of the Galaxy in the constellation of Kiel, whose rapid death can have a very negative effect on life on Earth.

“We have used the Hubble for decades to monitor this Carinae (η Carinae. – Appro. Ed.) In the optical and infrared ranges, thinking that we completely see all the outliers. These images look radically different – you can to see gas accumulations that we didn’t suspect, ”says Nathan Smith from the University of Arizona at Tucson (USA).

The star of Kiel is known for its unusual history. For the first time the light was noted on the sky map by the English astronomer Edmund Halley in 1677. During the 18th century and the beginning of the 19th century, the brightness of the star periodically increased and decreased.

For example, in 1827, its brightness began to grow rapidly, reaching a maximum in April 1843. At that moment, it eclipsed all the other luminaries in the sky, except for Sirius, located about a thousand times closer to the Earth than this Carina, remote from us by 7800 light years.

Observations on this star in the twentieth century and this century have shown that it is an extremely exotic binary system consisting of the largest star of the Galaxy with a mass of 170-250 Suns and its “small” satellite, whose mass is “only” 30-80 times. more than our luminary.

The light pressure inside the depths of the larger star is so high that the flashes of activity inside Eta Kiel literally break the outer covers of the stars, throwing them into outer space. According to current estimates of scientists, the larger “half” of the system has already lost about 30 solar masses during similar flares, the traces of which formed the beautiful Homunkule nebula surrounding this Carina.

The explosion of such a star, whose mechanism and consequences are not yet clear due to the uniqueness of Eta Kiel, will make it more visible in the night sky than Venus, and if the supernova “axis” is directed to Earth, it will lead to a large number of charged particles and gamma rays. They will destroy all satellites in orbit and, probably, will deprive the Earth of its ozone layer, which can cause disastrous consequences for life on our planet.
Smith and his colleagues found out that this carina was a much more restless star than scientists believed, having obtained her photos for the first time with the help of ultraviolet cameras of the Hubble orbital telescope.

A year ago, the Smith team almost accidentally discovered that the emissions of this dying star were moving at an incredibly high speed, about 15-20 thousand kilometers per second, which made them the fastest objects in the Galaxy. Having made this discovery, the scientists thought about how far the gas “shroud” of Eta Kiel reached and began to study it comprehensively.

To do this, scientists used not only the Hubble optical and infrared camera, but also its ultraviolet tools, which allowed them to evaluate how some of the “invisible” elements are distributed by the emissions of a dying giant.

To their great surprise, large quantities of these substances were found not only inside the “visible” Homunkule nebula, but also in the “emptiness” beyond its borders. Most of this hot gas, as scientists assume, got into space in the middle of the 19th century, during the first flash of Eta Kiel.
When this gas reaches the previous emissions of the star and collides with them, it will become even brighter, and astronomers will have the opportunity to understand what caused the explosion and when the largest star of the Milky Way has ended its existence.

In particular, Smith and his colleagues hope to check whether the outbreak was caused by the fact that this Kiel originally had two satellites, one of which could merge with it and cause a powerful explosion.