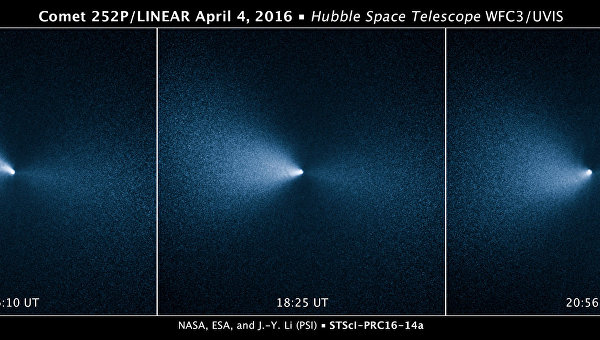 Using orbital telescope “Hubble” astronomers got an unusual series of photographs of the comet 252P/LINEAR is where you can see how it wags its tail in the cosmic dance.

The comet 252P/LINEAR was discovered in 2000, astronomers —”asteroid hunters” from the center LINEAR. She is a fairly bright and visible to the earth the comet that often pass near our planet during migration toward the Sun. In the nearest to the sun point of the orbit 252P/LINEAR is moving closer to the Sun approximately the same distance as the Earth, and in the far – removed beyond the orbit of Jupiter.

Comet 252P/LINEAR — ancestor a weak meteor stream, which every spring lights up the night skies of the Earth falling on the surface side of the constellation of the Hare. This year the observations of “hairy monster” was joined by astronomers working with the orbiting telescope “Hubble”.

At the end of March and in early April this year, the Hubble began to follow the movement of the comet, periodically getting her pictures from the tail. The result of the observations is an unusual series of photos where you can see how spinning the tail of the comet as it convergence and removal from the Ground.

The rotation of the tail, as the scientists explain, suggests that the comet nucleus, with irregular shape, rotates with sufficient speed. Astronomers hope that studying the details “twerking” 252P/LINEAR will help you to understand which form has it – and of what materials is.

Next visit 252P/LINEAR in the vicinity of the Earth will only happen in 2021. Then her “dance” will be able to take a picture is not “Hubble”, and his heir – orbital telescope “James Webb”.