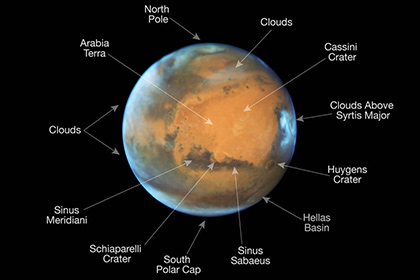 The Hubble Space Telescope has made a picture of Mars as closely as possible to the distance at which the unit was able to get close to the planet. The image was taken on May 12 when Mars was at a distance of 80 million kilometers from Earth. Image resolution up to 50 kilometers per pixel. It is possible to see the polar caps and cloud Red Planet.

In the picture you can see the plateau Syrtis Major, which is a shield volcano. To the south of it is oval Hellas Planitia. In it reaches a diameter of 1770 kilometers. Most likely, it was formed 3.5 billion years ago as a result of the fall of a large asteroid. 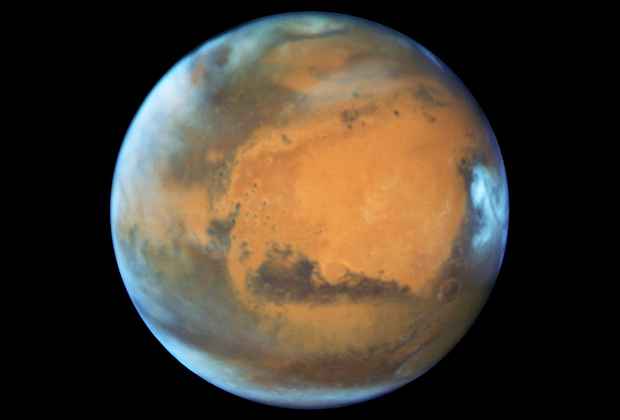 The orange area in the center of the image is Arab land (hill in the northern part of Mars in diameter reaching 4.5 thousand kilometers). This area is one of the oldest on the planet, and is covered with a plurality of channels and craters.

In the illustrated NASA Hemisphere we worked several missions, including the Viking 1 (1976), Mars Pathfinder (1997) and continues to operate the rover Opportunity. Designated landing rovers Spirit and Curiosity are on the opposite hemisphere. At a minimum for the last ten years away from the Earth Mars will be on 22 May. On this day, the Earth will be located exactly on the straight line between the red planet and the sun.