“Hubble” showed an exoplanet that does not reflect light 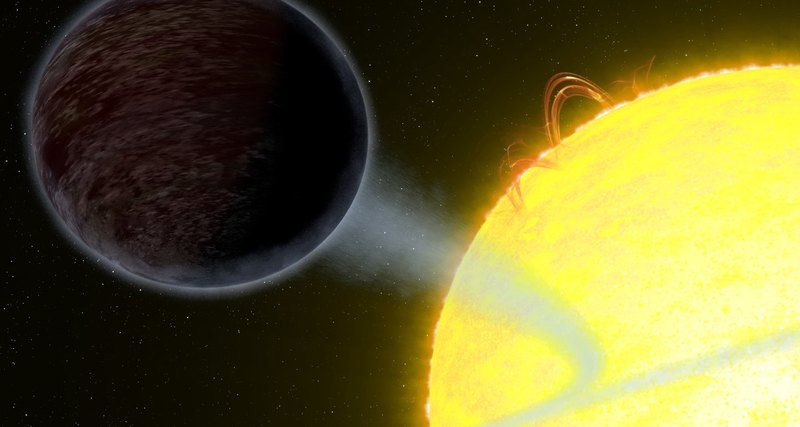 Measurements of the reflectivity of the exoplanet WASP-12b showed that the planet almost does not reflect light. If we could get closer to it, we would see a ball of fresh asphalt, explain the astronomers.

By sending to the planet WASP-12b the Hubble spectrograph, scientists from the international collaboration led by astronomers from the Canadian University McGill and the British University of Exter measured the albedo (reflectivity) of the surface of the exoplanet WASP-12b and obtained record low values: the upper limit of the value for WASP-12b – 0.064, which is half that of the Moon, and roughly corresponds to the reflectivity of hot asphalt.

The planet WASP-12b revolves around the sun-like star WASP-12A, which is 1400 light years from Earth. Relative proximity of the star to the solar system and the convenience of location made WASP-12b one of the most extensively studied exoplanets. The planet is huge (almost twice as large as Jupiter, and its orbit is very close to the star, so that the year on the planet lasts slightly longer than the earth’s day.) The star’s gravity pulled the planet along the equator: WASP-12b is not round, but rather shaped like an egg. astrophysicists, the planet is very hot: the star is burning its surface up to 2600 ° C. The high surface temperature partly explains the low albedo.

There are other Super-Jupiters with a low albedo, but these planets are not as hot as WASP-12b, and their blackness is usually explained by dense clouds. But the temperature of WASP-12b is too high to form clouds. The atmosphere of the planet consists of atomic hydrogen and helium and looks more like the atmosphere of a small star.

WASP-12b became the second exoplanet, for which it was possible to measure the albedo: the first was HD 189733b – a gas giant from the constellation Chanterelle. Measurements of the reflectivity of HD 189733b indicate that the planet reflects blue light – and therefore in the rays of its star it looks blue. Unlike it, WASP-12b almost does not reflect light, but weakly shines itself, so it should look black with reddish gleams.