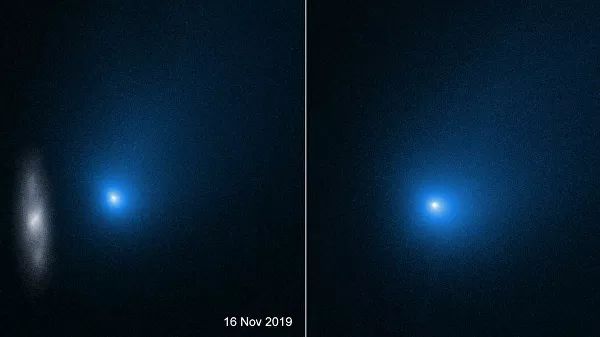 The Hubble Space Telescope again captured Borisov’s comet during its maximum approach to the Sun. Prior to that, he managed to photograph this interstellar object in October and November of this year. Pictures are published on the website of the Hubble project.

Comet 2I / Borisov was discovered on August 30, 2019 by a member of the astronomical station GAISH of the Moscow State University in Crimea Gennady Borisov. He announced his discovery at the Center for Small Planets of the International Astronomical Union in Cambridge (USA). The Near-Earth Object Research Center at NASA’s Jet Propulsion Laboratory calculated the orbit of the comet, showing that it is an interstellar body that has flown to us from another part of the galaxy.

2I / Borisov is just the second of the known interstellar objects flying through the solar system. The first was the asteroid 1I / Oumuamua, which in October 2017 passed at a distance of about 38 million kilometers from the Sun and left the solar system.

On October 12 of this year, the Hubble Space Telescope was able to take a series of images of Borisov’s comet, flying at a speed of more than 175 thousand kilometers per hour at a distance of about 420 million kilometers from Earth.

On November 16, the Hubble once again shot a comet when it was 326 million kilometers from Earth. In this spectacular shot, the comet is visible next to the spiral galaxy 2MASX J10500165-0152029. The bright central core of the galaxy in the image is blurry because Hubble has been following the comet. The tail of the ejected dust moves into the upper right corner.

And finally, on December 9, Hubble again captured comet 2I / Borisov, now at the point of perihelion – during its closest approach to the Sun. At that moment, it was located at a distance of 298 million kilometers from the Earth, near the inner edge of the asteroid belt. Despite the fact that this is the largest plan of the object, it is still impossible to clearly distinguish between the core, consisting of ice and dust accumulation, but the clearly visible bright central part is a coma, consisting of dust leaving the comet’s surface.

“Based on the Hubble telescope, we can estimate the upper limit for the size of Comet Borisov’s nucleus, which is very important,” said David Jewitt, professor of planetology and astronomy from the University of California, Los Angeles, on the project’s website. but the pictures show that the core has a radius of less than half a kilometer, which is about 15 times smaller than previous studies had suggested. Knowing the size of the core is useful for assessing how common such objects are in the solar system and in our galaxy. Oris – the first known interstellar comet, and we would like to know how many of them can still be. ”

According to scientists, Borisov’s comet will be as close to the Earth as possible on December 28, when it will be at a distance of 290 million kilometers from us.