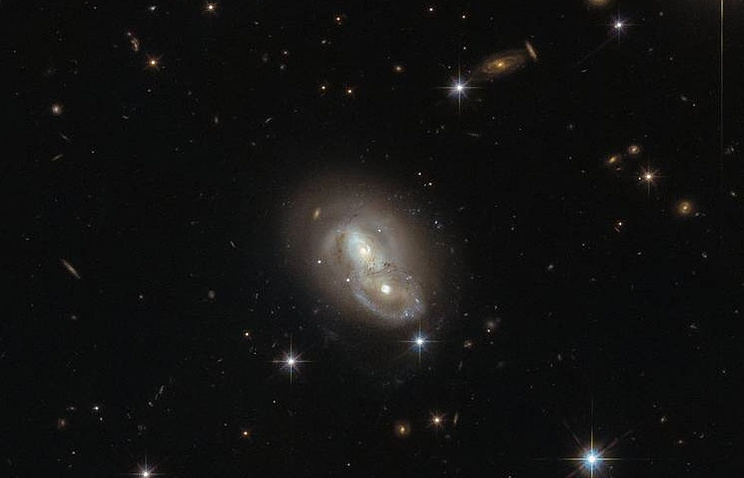 The Hubble Orbiting Telescope has helped astronomers see and even observe an unusual pair of galaxies that rush past one another at a speed of about 2 million kilometers per second. This was reported on Friday by the US National Aeronautics and Space Administration (NASA).

Initially, the researchers believed that this is a single object, which was named IRAS 06076-2139 and is located in the constellation of Hare. On-board instruments monitored it from a distance of 500 million light-years.

From NASA’s perspective, the speed of movement of two galaxies is large enough to interfere with their merger. At the same time, both objects are separated by about 20 thousand light years, which is relatively small by space standards. It, however, does not prevent their interaction through the force of attraction. As the US space agency reminds, such interaction can take various forms – from conditionally cannibalism to collision. Our Milky Way galaxy must eventually merge with the Andromeda galaxy, which will happen in 4.5 billion years.

This year, NASA concluded an agreement with the American Association of Universities engaged in astronomical research to continue scientific research using the Hubble telescope until June 30, 2021. The contract amount is about $ 196.3 million.

Hubble, as well as Chandra, which allowed to make a lot of important discoveries and get unique information about the structure of the universe, are the oldest of all current space telescopes. The first of them was sent into orbit in 1990, and the second – in 1999. Chandra’s ally belongs to the Newton X-ray telescope, created by the European Space Agency in cooperation with NASA.

The US space agency plans to launch a James Webb telescope in 2018 aboard a European Ariane 5 launch vehicle from the Kourou cosmodrome in French Guiana. James Webb with a mirror with a diameter of 6.5 meters will be the most optimal monitoring tool. The mirror grid of the telescope consists of 18 segments, each of which has the shape of an equilateral hexagon and weighs about 40 kg. For their production was chosen beryllium – a material resistant to ultra-low temperatures. Scientists expect to receive important information about the formation of galaxies, stars and planets, including objects in our solar system with the help of a new tool.