Huge coronal hole in the Sun 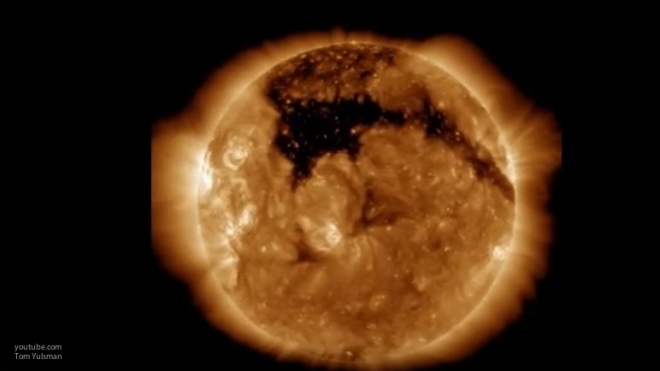 The observatory of solar dynamics of NASA watched a huge solar coronal hole from December 2 to December 9, 2016.

Such holes arise in those parts of a solar crown where magnetic field of the Sun is opened to space. Charged particles direct in space at a high speed, lowering density and temperature of material in those areas of a crown where it occurs. The dark stain in a crown which is visible when scanning by X-rays becomes result.

Charged particles are thrown out of a crown of the Sun all the time, creating solar wind. As material in a crown hot also moves vigorously, gravitation of the Sun doesn’t constrain him completely. On average, solar wind blows with a speed of 400 km/s. But the speed of wind which is thrown out of coronal holes, twice higher.

The coronal hole on this animation has directed a stream of solar wind more or less directly to Earth. The small geomagnetic storm on Friday, December 9 became result. Geomagnetic storms occur when the stream of high-speed solar wind transfers the considerable volume of energy to a huge magnetic bubble of Earth — a magnetosphere. It can cause considerable changes in currents, plasma and fields in a magnetosphere, a beautiful polar light and interruptions in operation of satellites and power supply networks become result of what.