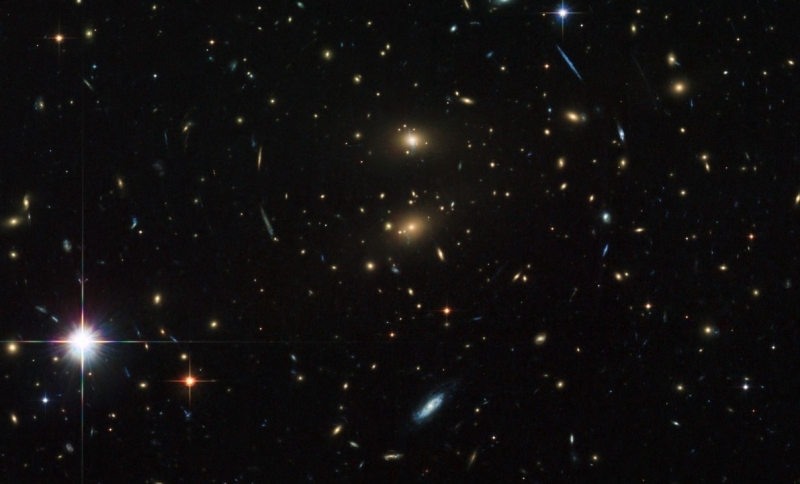 Peering into the depths of space — into a giant abyss of stars, galaxies and the afterglow of the Big Bang itself — you would think that if humanity will be able to understand the laws of nature and create good enough technology, there are no limitations to what we can explore.

If we could develop technology of thermonuclear fusion, to be able to store antimatter or even use dark matter to travel, we would open for themselves the interplanetary, interstellar or even intergalactic travel. Accelerating for several months to reach near-light speed, we could reach wherever we want in one life.

But even if we imagine a future where we all learned that in the Universe there are parts that will never be available to us. If the universe was static, fixed and unchangeable, to get to the distant object, we would need time and only time. But our universe isn’t like that. It expands, cools and spreads from initially hot and dense state known as the Big Bang.

From where we are, we can see a lot:

hundreds of billions of galaxies;

each with billions of stars;
that stretched billions of light years in all directions;
for which we can still see the afterglow of the Big Bang.

Once this glow was so hot that it ionizes the atoms and split core and even spontaneously created matter and antimatter. Due to the expanding Universe, it cooled down to the microwave portion of the electromagnetic spectrum with a temperature of less than a few degrees above absolute zero. From the moment of the Big Bang radiation was moving at the speed of light — at a speed that you cannot exceed no matter, but his energy dropped as stretched the wavelengths of the expanding Universe.

Some time gravity would slow this expansion, and once the most distant galaxies slowed his movement from us. As time went on, and the light from these distant objects has caught up with us, so we have the opportunity to observe all this abundance.

But about 6 billion years ago the universe expanded to such a large volume, and the density of its “stuffing”, like matter and radiation, has fallen to such low values that became more important new form of energy: dark energy, or the energy inherent in empty space. When this form of energy will prevail, the expansion of the Universe began to accelerate, and the distant galaxy began to move away from each other faster and faster.

Even the powerful influence of gravity, holding the atoms, planets, stars, galaxies or even groups and clusters together, was powerless to reverse the process. Our local group Milky Way, Andromeda, the Triangle and 50 other smaller galaxies — was tied up long before dark energy became an important catalyst for the extension, so dark energy can not break these structures. Eventually all the galaxies in our local group will merge together and form one giant elliptical galaxy Lacomeda. In 4 billion years the milky Way and Andromeda will merge into one and the Earth will be a gorgeous night sky.

But beyond our local group all other galaxies, groups and clusters will be faster to fly. After sufficient time, even the closest galaxy outside our local group will go so far as to become invisible in any wavelength of light, for even the most powerful telescopes that we will ever build. The afterglow of the Big Bang itself damped, and we were alone with the stars in our own galaxy. They will burn for trillions of years, quadrillions of years through the formation of new. Born in that distant future will not be able to understand that outside the galaxy there existed another universe — any memories of the past will cease to exist, and they will not find in any way. If we today decided to go to the most distant stars and galaxies that you can imagine, and would move at the speed of light, we could reach only up to 3% of the observable Universe, and that number is getting smaller and smaller with each passing second.

Even after a hundred billion years or so, only several times more than the current age of the Universe, Lacomeda will be the only thing left, and all living creatures will not be able to achieve anything other than our local group, wherever you are. Appreciate what we have today: this is the best view of the Universe that we could obtain. There can never be another.