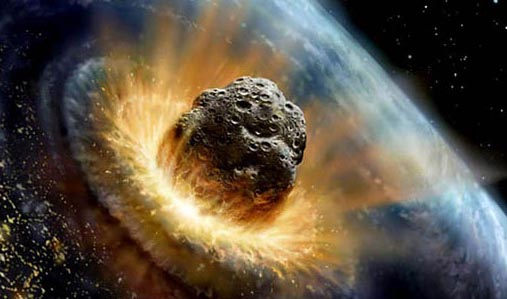 Humanity is not yet able to protect themselves from potentially dangerous asteroid to Earth, but now we are moving in the right direction, said the adviser to the U.S. President for science and space John Holdren, speaking at a briefing at the space flight Center of NASA Goddard.

We are not fully ready to protect Earth from asteroid danger, but now we are moving rapidly in this direction. We are investing more resources in the search for potentially hazardous asteroids with a large size, and recently we received a good example of how difficult this task in the fall of the Chelyabinsk meteorite, ” said astrophysicist.

According to him, the fall to earth of even a small meteorite that does not fall into all known categories of danger, caused the explosion with a capacity of 400-500 kilotons of TNT, which injured thousands of people and caused serious economic damage.

Chelyabinsk meteor and the Tunguska meteorite of 1906 showed that the fall of such objects are extremely rare, but they happen once in a hundred thousand years. With the Tunguska meteorite we were lucky, and there is no guarantee that such disasters will always occur over the territories where there are no people. In order for our civilization continued to exist, we must be prepared even for such rare events. Therefore, the mission ARM focused in on the task of protecting the planet from such threats, ” continued Obama adviser.

US President Barack Obama in 2010 has set NASA the challenge to organize an expedition to the asteroid in the first half of the 2020s, and 2030 to Mars. To solve this problem NASA launched the 2014 initiative ARM (Asteroid Redirect Mission), under which the space Agency had planned to visit an asteroid in the vicinity of the Earth to capture it or to change the course of its movement.

Initially considered two options for its implementation – plan a, involving the capture of a small asteroid with a special bag and transported to the orbit of the moon, and Plan B, in which a NASA probe was to land on the surface of a large asteroid, separated from it a part of his rock and transport it towards the Earth.

In March last year, NASA experts decided to go the second way, as it provides more scientific advantages, including the study of the shift of the asteroid from a collision course with Earth. In January 2016 began a detailed study of the mission, with participation from the jet propulsion Laboratory of NASA and representatives of the private space industry.

According to Michelle gates (Gates Michel), head of project ARM, the final draft of the probe will be approved by NASA in 2018, in 2017, the competition will end on its development. While NASA has not selected a target for the ARM, but they likely will be, have not been studied, a large asteroid with a high content of water and primordial matter of the Solar system.

When a fragment of the asteroid will be delivered into orbit, NASA plans to send to him manned spacecraft Orion, the crew of which will capture an asteroid and deliver it to Earth for study. Successful completion of this enterprise, as I hope NASA will help to understand how humanity is ready to protect itself from outer threats and to mining on small celestial bodies of the Solar system.