Hypernova burst in a flash of black light 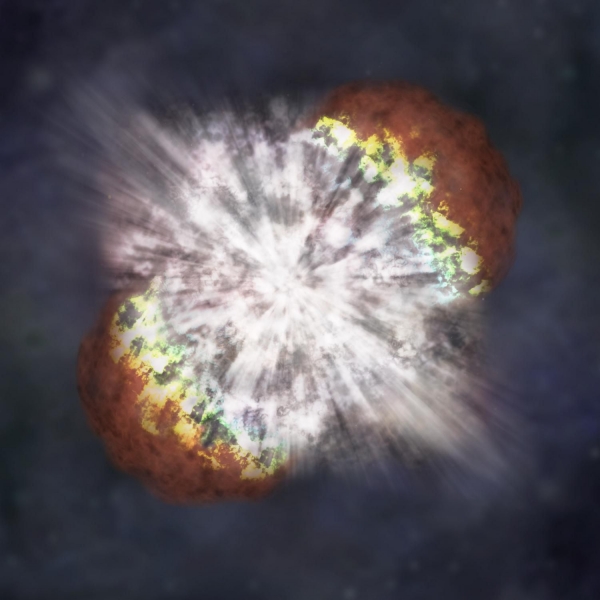 An international team of astronomers led by Peter brown from Texas A&M University, USA, noticed an amazing re-increase brightness in the ultraviolet range distant super-bright supernova, known as ASASSN-15lh. This event has led scientists to confusion because it does not demonstrate the characteristic features of super-bright supernova or tidal event of the rupture of the cosmic bodies in the emission spectra of hydrogen.

Super-bright supernova, Hypernova is also called, usually ten times brighter compared to ordinary supernovae. Hypernova ASASSN-15lh, discovered with the help of sky survey All Sky Automated Survey for SuperNovae (ASAS-SN) to 2015, justifying its name, is a true “assassin” among the cosmic explosions of this type. It exceeds the power of conventional supernovae are about 200 times and about 570 billion times greater than the brightness of our Sun. She is the winner of the title of the brightest supernovae discovered by scientists today.

In their study, brown and his colleagues used data obtained by the spacecraft NASA swift space telescope and the NASA/ESA Hubble”, for a detailed study of the system ASASSN-15lh. They found that the flow of energy, coming from this supernova in the ultraviolet range, has increased significantly, while the luminosity of this object a hundred times higher than the luminosity of the hydrogen rich, colorful in the UV range of SN II supernovae SLSN 2008es. According to the researchers is the repeated increase in brightness is observed two months after maximum brightness was comparable with the flash of super-bright supernova.

Currently the authors are unable to give a theoretical explanation of their findings and urge theorists to pay attention to these observational results and to develop a theory of the phenomenon, given the restrictions imposed by the observations, such as the shape of the explosion, the optical/UV light flux, the x-ray flux and the lack of hydrogen – most common element in the Universe.

The study presented on the server prior scientific publications arxiv.org.