I see the astronauts when returning to Earth? 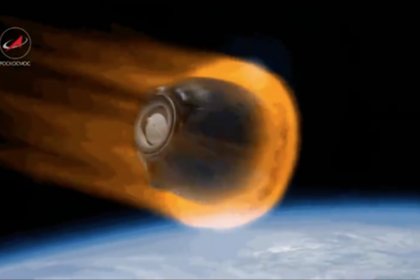 What astronauts see when they return to Earth? The model of “Roscosmos” will allow you to be in a capsule flying on the route, the ISS — Earth.

The Corporation has published video guides on administration, flight and landing of the capsule and accompanied it with comments. The first clip is dedicated to the separation of the spacecraft “Soyuz TMA-19M in three parts — the descent module with the astronauts, instrument-aggregate and household compartments.

In the second video capsule enters the earth’s atmosphere.

The third stage flight through the eyes of cosmonauts, located in the capsule.

Then, explains the “Roscosmos”, the machine accelerates to 220 km/h at an altitude of 10.5 km, and At this moment operates a system of shooting the cover of the parachute container. The cover of the container activates a chute which is separated from the capsule at a height of 8.5 km. the Astronauts together with the capsule continued to decline on the main parachute.

We will remind, Yury Malenchenko (Russia), Timothy Kopra (USA) and Timothy Peake (UK), landed safely in the Kazakh steppe in 147 km from the city of Zhezkazgan on Saturday, June 18. All three are members of the 47th expedition.