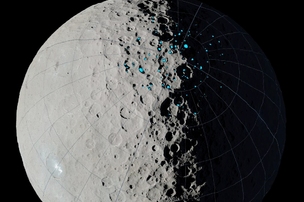 The dwarf planet Ceres is located at a distance of several hundred million kilometers from Jupiter, and even farther from Saturn, but powerful influence of gravity has a significant impact on the orientation of Ceres from these gas giants. In the new study, researchers NASA Dawn mission estimated that the inclination of the axis of rotation of Ceres own in relation to the plane of its orbit around the sun changes significantly with the period of about 24500 years.

This change of inclination of the orbit of the dwarf planet according to the authors of the new study, led by Anton Ermakov, employee NASA Jet Propulsion Laboratory, US, are associated with the distribution of frozen water on the surface of Ceres. According to calculations Ermakova team inclination of the orbit of Ceres has changed over the past three million years from 2 to about 20 percent. Last time, when the tilt of the planet’s orbital axis reaches its maximum value of about 19 percent, took place about 14,000 years ago. For comparison, the tilt of the Earth’s orbit is about 23.5 degrees, so Ceres during this period also experienced a change of seasons, just as it is happening to our planet, when the northern hemisphere of the planet is tilted toward the sun, it reigns in the summer, and in the south hemisphere at this time of winter reigns.

In their study, Ermakov and his colleagues were able to show that the alternate treatment polar regions Ceres – then north, then south poles – in the direction of the sun led to the melting of ice located in the shady depths of the polar craters, so that the ice remained intact only a few closest craters to the poles, while in other parts of the polar regions of the ice had time to melt. These calculations are corroborated by the results of surveys conducted with the help Dawn mission, which resulted in detected projected in the proposed model deposits of ice in craters near the north pole and the south of Ceres.