Ice on Europa’s surface can glow in the dark 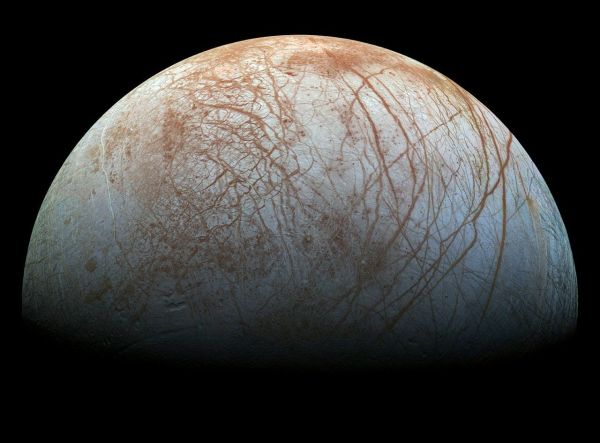 Scientists speculate that under the icy surface of Europa, Jupiter’s fourth largest moon, lies a giant ocean: a huge body of water that potentially represents one of the best places to search for extraterrestrial life in the solar system.

A new study led by a team led by Murti Gudipati, a physicist at California Institute of Technology and NASA’s Jet Propulsion Laboratory, has revealed a new fact about the smallest of the Galilean satellites – scientists believe that radiation from Jupiter’s magnetic field can cause a glow on the icy surface covering Europe from -for reactions with ice chemistry.

“Europa’s surface is constantly experiencing intense flows of charged particles due to the presence of Jupiter’s strong magnetic field. These charged high-energy particles, including electrons, interact with a surface rich in ice and salt, resulting in complex physical and chemical processes, ”the study authors.

Given that we do not yet fully understand the chemical composition of the European ice sheet, it is unclear what these processes will actually look like. So far, neither the Keck Observatory in Hawaii nor the Hubble Space Telescope have directly recorded this hypothetical glow.

However, in the next decade, we will have a better view of Europe when NASA’s Europa Clipper spacecraft visits the satellite and gives us the chance to witness a phenomenon called electronically stimulated luminescence. In the meantime, we can model what it might look like with substances and devices that mimic Europa’s ice and Jupiter’s high-energy electron radiation.

In a series of laboratory experiments, Gudipati’s team cooled cores of water ice in an aluminum tube, cooling the ice to -173.15 ° C and exposing it to pulses of electron radiation.

During the experiment, the ice emitted a glow, but its intensity depended on what chemicals were present in the water. “We found that the presence of sodium chloride and sodium carbonate strongly quenched the glow, while epsomite intensified the radiant glow of the ice,” the scientists write.

Visible glow of the irradiated ice core under illumination, darkening and in complete darkness

In addition to the exciting hypothesis that Europa could glow continuously in the dark, these findings could pave the way for new methods of studying the icy moon.

In particular, it is possible that the Europa Clipper imaging systems will be able to observe the glow from orbit (about 50 kilometers) and, by analyzing the spectra, shed new light on the chemical composition of the lunar ice.

In addition to helping future exploration of Europa, the same techniques could lead to new ways of analyzing Jupiter’s other moons, such as Io and Ganymede, although researchers admit Europa’s wondrous features may be unique.

“Due to the unique radiation environment and the rich geological and compositional diversity on its surface, the night ice glow that occurs in Europa may be unique and unlike any other phenomenon in our solar system,” the scientists conclude.