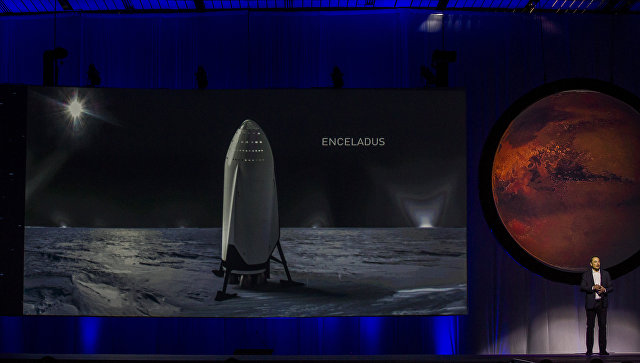 The rocket and the BFR spacecraft, intended for flight to Mars, will initially be tested during short flights from one point to another on the Earth, Elon Musk stated in a discussion with users of the online forum Reddit.

“We will start developing BFR from the construction of a full-fledged ship that will make short flights between two points on Earth, climbing to a height of several hundred kilometers and flying the same distance.” Such tests will be simple enough for the ship – they will not require a thermal screen, which will allow us have large reserves of fuel on board and deprive us of the need to use powerful Raptor engines, designed for flights to distant space, “- said the entrepreneur.

At the end of September this year, Elon Musk, the founder of SpaceX, spoke about the renewed plans for the colonization of Mars, announcing the launch of the development of a new multipurpose missile, the BFR, which will be used for flights to the red planet and as a “space taxi” on Earth.

This missile and associated spacecraft for interplanetary flights, as the entrepreneur hopes, will help him collect about $ 10 billion needed to realize his main dream – to create an independent colony on Mars with a population of about one million people. The conversion of BFR into a cosmic “taxi”, capable of delivering a person to an arbitrary point on the surface of the Earth in 30 minutes, in his opinion, will help to raise these funds.

For this reason, the first BFR tests will be conducted in this “ground-based” mode – the Raptor heavy-duty engines, able to compete in the thrust with the propulsion system of the super-heavy Saturn V rocket of the Apollo program, will be tested after the BFR has completed the take-off and landing procedure ground surface.

In this configuration, BFR, as Musk noted, can reach the cosmos in principle, but only if the cargo mass on its board is minimal. For a full flight to the moon or to Mars you will need “real” engines, a new version of which, as the entrepreneur admitted, will have half the thrust than the first prototype Raptor. This, he said, is due to the fact that the mass of BFR will be noticeably smaller than it originally planned.

In addition, SpaceX engineers modify the design of the engines themselves, making them more suitable for landing on Earth, which is necessary to transport particularly heavy loads from one point of its surface to another, and also change the number and design of landing “legs” to improve stability and safety .

According to Mask, now he is confident that the company will collect the necessary amount of money to build the BFR and the flight to Mars, but the construction of the city itself, he believes, will require assistance and will be carried out by other space start-ups.

“Our main goal is to bring humanity to Mars and create an infrastructure there that will produce fuel and ensure the survival of people.” Industrial enterprises and infrastructure will be built on Mars by quite different companies and millions of future colonists, “the entrepreneur concluded.