In a collision with the progenitor of the Moon, the Earth could lose half of the atmosphere 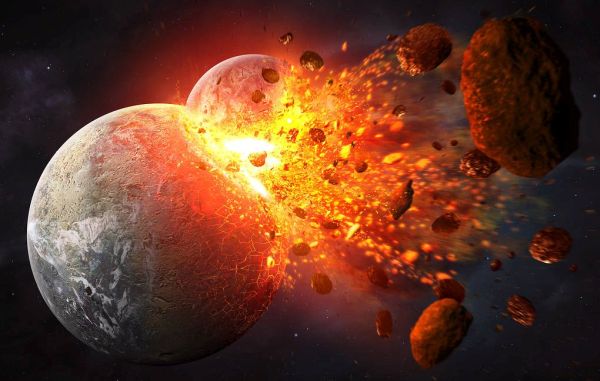 Planetary scientists have calculated in detail the consequences of the collision of the Earth and Theia – a celestial body, which is believed to have caused the appearance of the moon. The researchers concluded that this cataclysm could deprive the Earth of up to half of its original atmosphere. The article with the results of the work was accepted for publication by the scientific journal Astrophysical Journal Letters.

“We have calculated hundreds of different collision scenarios, tracking how its consequences change for the Earth’s atmosphere at different angles or rates of fall, as well as changing the size of protoplanetary bodies. These calculations will help us narrow down the possible set of scenarios for the formation of the Moon,” said one of the authors of the work , planetary scientist from the University of Durham (UK) Jacob Kegerreis.

Planetologists believe that the Moon was the result of a collision between Earth and Theia, a protoplanetary body the size of Mars. As a result, the matter of both objects was mixed, and the fragments of Theia, together with the matter of the proto-Earth’s crust, fell into near-earth orbit, where the Moon was subsequently formed. This theory explains well the mass of our satellite and some features of its appearance, in particular, the absence of iron compounds on its surface.

On the other hand, some predictions of this theory partially contradict the fact that the chemical and isotopic composition of the Earth and the Moon are practically indistinguishable from each other. This is almost impossible to explain if we assume that the Moon inherited a significant proportion of its matter from Theia, which arose in another region of the solar system with different proportions of isotopes and various rare elements. Due to such considerations, scientists cannot yet find out exactly how our planet and its satellite originated.

Kegerreis and his colleagues tried to narrow down the number of possible scenarios for the collision of Theia and proto-Earth by calculating how this cataclysm was supposed to affect the atmosphere of our planet. Such calculations, as the planetary scientist explains, have never been carried out before, since this requires sufficiently large computing power.

British planetary scientists have created a computer model of the colliding planets that greatly simplified this task. Thanks to this, scientists have calculated more than 250 different scenarios for the fall of Theia on proto-Earth.

These calculations showed that in most scenarios, due to the fall of Theia from the Earth, a significant part of the Earth disappeared, ranging from 10% to 60% in the most extreme cases. This fact, as the researchers note, must be taken into account when developing computer and theoretical models of the formation of our planet.

Accordingly, if scientists find traces of such a loss of the atmosphere, it will help planetologists or geologists narrow down the list of possible scenarios for the emergence of the moon and find out the history of the existence of the Earth in the early epochs of the solar system.