In Canada, a meteorite fell 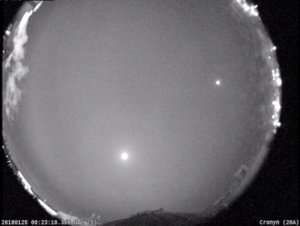 At 7:23 pm local time, a network of cameras from the University of Western Ontario, Canada, captured a fireball over the southern part of the Canadian province of Ontario. An analysis of the video data showed that the fragments of the meteor probably reached the ground between the towns of St. Joseph and Credon, Ontario.

The network of the Chambers of the Department of Physics and Astronomy is constantly watching the whole sky in search of meteors. Professor Peter Brown of the University of Western Ontario, Peter Brown, a leading expert in the study of meteors, confirmed that this event is a meteor outburst, as all 12 cameras of the Western “s Southern Ontario Meteor Network (SOMN) registered a fireball over the western part of Ontario.

“This fireball is especially important because it was observed very low in the atmosphere, just north of Grand Bend – which is a sign that the material probably could reach the surface of the Earth. In fact, the outbreak was still observed at an altitude of 24 kilometers, “Brown said. – The only meteor that penetrated the atmosphere deeper is the meteorite Grimsby, which left a lot of meteorites, flashing in the sky on September 25, 2009. ”

Preliminary results show that this fireball became visible at an altitude of 75 kilometers. The initial mass of the meteor was, presumably, several kilograms, so the residual mass of the meteorite material is estimated to range from several tens to several hundred grams.