In giant planets can be “dark” hydrogen 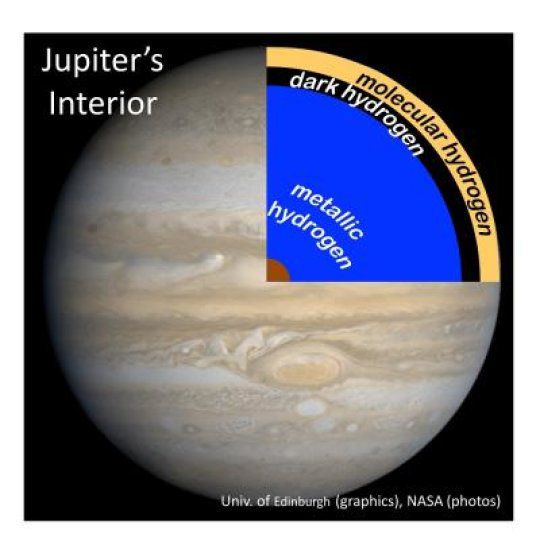 Hydrogen is the most abundant element in the Universe. It is also the simplest element with only one electron on each atom. However, this simplicity is deceptive because our knowledge on hydrogen is still not deep enough.

One of the biggest mysteries associated with hydrogen is its transformation at high temperatures and pressures found in the depths of the giant planets in the liquid metal, capable of conducting electricity. In the new work, conducted by Alexander Goncharov of Carnegie institution, USA, and Stuart McWilliams from the University of Edinburgh, United Kingdom produced by the parameter measurement condition under which the phase transition of hydrogen in the laboratory and the presence of an intermediate state between gas and metal, which the authors called a “dark hydrogen”.

On the surface of giant planets, hydrogen is in gaseous form. However, between the gas surface and the hydrogen in the form of liquid metal located in the planet’s core, lies a layer of dark hydrogen, according to laboratory experiments conducted Goncharov and McWilliams.

Using a cell with diamond anvils, the heated lasers to recreate conditions existing in the bowels of the giant planets, the team investigated the physics of hydrogen in the pressure range from 10,000 to 1.5 million atmospheres at temperatures up to 5000 degrees Celsius.

In the experiment, scientists have discovered that mysterious intermediate phase, which does not reflect or pereslushal visible light, but pereslushal infrared rays, or heat.

“These observations explain why the heat is so easily lost giant planets such as Saturn,” explains potters.