In regions of eternal darkness of Ceres have found water 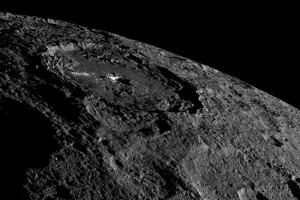 The German and American scientists have shown that at Ceres water is present also at regions of eternal darkness.

Scientists during the mission of Dawn, having carried out the spectroscopic analysis of a surface more than 600 craters, in 10 of them have found water ice which was never lit with a sunlight.

The small number of such places on the dwarf planet indicates, according to authors, a shock origin of water ice in craters.

Water on Ceres has been found in 2014 during observations from Earth. Then these data have received the confirmation within the mission of Dawn. Ceres became the third celestial body of Solar system, after the Moon and Mercury where water ice is found in continuously darkened areas.

The Dawn station has been started on September 27, 2007 by means of the carrier rocket Delta 2 from Cape Canaveral launch site in the USA, and in an orbit about Ceres it has appeared on March 6, 2015. Project cost on studying of an asteroid of Vesta and the dwarf planet of Ceres makes about 500 million dollars.

The dwarf planet is discovered in 1801 by Italian Giuseppe Piazzi and called in honor of the ancient Roman goddess of fertility. Diameter of a space object makes 950 kilometers that does it by the largest celestial body in a belt of asteroids between orbits of Mars and Jupiter.