In space, found a record of the bright double star 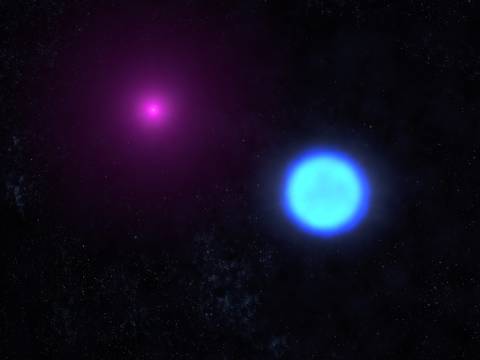 Researchers have found a star with LMC P3 record-high gamma radiation. This is the first luminary of the kind identified outside our Galaxy.

The object LMC P3 is located at a distance of 163 thousand light years away in the Large Magellanic Cloud galaxy. For the first time about the existence of the LMC P3 learned in 2012: data were provided by the Observatory “Chandra”, which revealed the strongest x-ray source. Scientists came to the conclusion that this source is located near a massive star, which would be larger than our sun 25-40 times. However, it was unclear what spawned such a powerful radiation. It was assumed that it could be either a black hole or neutron star. And now the experts were able to answer this question.

With the help of the space telescope “Fermi” experts have reviewed coming from LMC P3 gamma radiation. It turned out that his power is incredibly high. Comparing the new data with the previously obtained from the Observatory “Chandra”, the experts found that LMC P3 is a double star around the “full” light spinning neutron star. Scientists came to the conclusion that the LMC P3 is the brightest known star systems in the radio and x – ray ranges. Record the bright light is due to the interaction of two objects. The frequency of gamma-ray emission from the star is 10.3 days.