In space, found a ring of gas with organic molecules 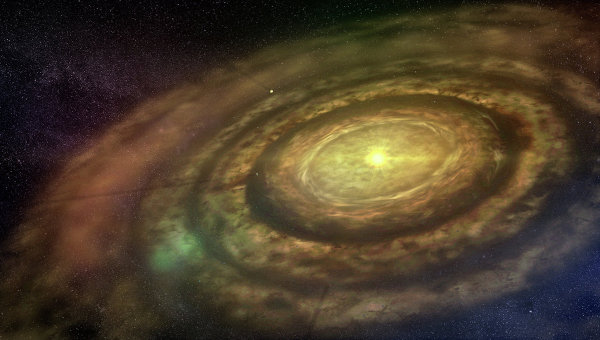 Yoko OYA (the University of Tokyo in Japan, and her colleagues studied triple system IRAS 16293-2422, located in the constellation of Ophiuchus, 446 light-years from Earth.

This system consists of a cloud of gas within which the embryo there are two stars rotating around each other, and a third Bud stars orbiting them at a distance of 10 distances from the Sun to Pluto. As the gas and the future stars do not have a high enough temperature for observations with optical telescopes, the scientists used the radio telescope ALMA.

During observations they found around the future stars of ring of gas, which contains organic molecules after measuring the speed of his movement, it turned out that the gas rotates, and also identified a ring-shaped form. This ring is between a protoplanetary disk and a gas-dust cloud surrounding the place of star formation. Organic molecules therein include carbonyl sulfide (sulfur, oxygen, and carbon) and methylformate (formic acid and methane).

This discovery suggests that organic molecules (the building blocks of life) formed in the interstellar medium in grains of dust and ice can accumulate between a protoplanetary disk and a gas-dust cloud after the collapse of the grains during the collisions with other particles. Similarly, organic matter could appear in the Solar system at the dawn of its formation, after which she was taken to our planet of comets and asteroids.