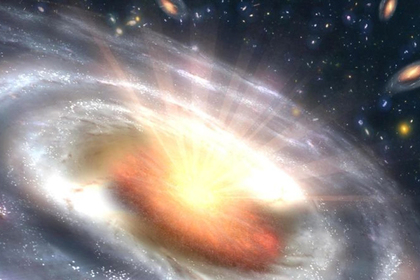 An international group of astronomers discovered atypical oscillations of electromagnetic radiation from distant galaxies, which are sources of radio waves. Experts call the reason for the passage in front of them of unknown supermassive objects from dark matter, presumably, black holes. The article is published in the journal Astrophysical Journal, briefly about the study tells the publication Gizmodo.

In 2009, researchers conducted observations of the galaxy J1415 + 1320 with an active core, which is about 3.7 billion light-years distant from the Earth. The scientists noticed a brief increase in the brightness of the radio source, which was then followed by a relatively long fall in luminosity. These “failures”, lasting 200-500 days, resulted in a repeated increase in brightness. On the chart, such fluctuations looked like “craters”.

Similar oscillations of light were noted in seven other radio sources. Since researchers had to analyze radio waves from thousands of objects like J1415 + 1320, this makes the observed phenomenon rare.

Such a darkening can occur when a gravitational lens passes before the radio source. This is the name of any large object, which, with its gravitational field, bends the propagation of electromagnetic radiation. Since the decrease in brightness did not depend on the wavelength, such an object could not be a cloud of gas absorbing rays of a certain “color”.

According to the researchers, blackouts can occur because of giant black holes, whose mass is a thousand, millions of times larger than the mass of the Sun. These objects could remain from the time of the Big Bang and represent a dark matter.