In the atmosphere of Mars they found “rivers” of metals 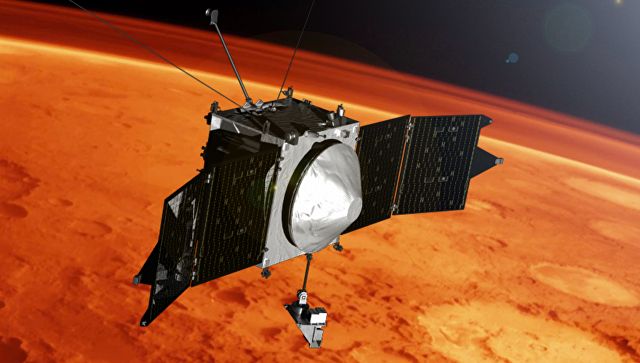 New data from the MAVEN probe show that not only hydrogen, carbon dioxide and nitrogen are contained in the atmosphere of Mars, but also unique bands of metal ions that have fallen on the red planet along with micrometeorites, NASA reports.

“MAVEN for the first time directly recorded the constant presence of metal ions in the ionosphere of any planet other than Earth.Ions of metals live in the atmosphere for a very long time, and during this time they manage to travel long distances under the influence of winds and electric fields, which allows them to be used for observing flows Air in the ionosphere, “says Joseph Grebowsky of NASA’s Goddard Space Flight Center.

According to planetologists, in the distant past, about four billion years ago, Mars was very similar to Earth. It had a dense atmosphere, oceans from the water and a mild enough climate, which made it potentially suitable for the birth of life. After about a billion years, Mars turned into a lifeless desert – its atmosphere evaporated into space, and the water reserves either evaporated, or frozen and were hidden under the sands of the red planet.

Why did this happen? Today scientists think that the reason was that Mars, unlike Earth and Jupiter, does not have its own magnetic field or it disappeared in the first few hundred million years of the planet’s life. As a result, the particles of the solar wind, colliding with the atmosphere of Mars, literally “ripped” it and deprived the planet of 99% of the air reserves.

In 2013, NASA sent to Mars the MAVEN probe to uncover the mystery of when and how the atmosphere of Mars disappeared, and the search for possible causes of this cataclysm. Immediately after the arrival of MAVEN to the red planet, scientists began to record strange traces of metals and dust in the upper atmosphere, which they did not expect to see.

According to Grebowski, initially they considered the “tail” of Comet Siding-Spring to be the source of these materials, through which Mars flew in October 2014, but the subsequent two years of observations showed that the ions of sodium, magnesium, iron and other metals did not disappear anywhere. This led scientists to look for a potential source of these substances on Mars and beyond.

Analyzing the data collected by MAVEN, NASA’s scientific team came to the conclusion that the source of metals are Martian micrometeorites, constantly burning in the atmosphere of Mars. They contain small amounts of different metals that ionize during the combustion of the meteorite and continue to soar in the ionosphere of the planet for a very long time.

As scientists believe, similar processes should occur in the atmospheres of other planets in the solar system. This factor, according to planetologists, should be taken into account when creating descent vehicles, since such a layer of metals in the atmosphere can interfere with the operation of communication systems with the Earth or probes in orbit.

Interestingly, these ions, unlike their brethren on Earth, are organized in beautiful layers only in certain parts of the Martian atmosphere located above those regions of Mars, in whose rocks the remnants of the primary magnetic field of the red planet have been preserved. Now scientists are exploring these differences between Earth and Mars, trying to understand how they can influence the evaporation of the Martian atmosphere.