In the atmosphere of Pluto, clouds 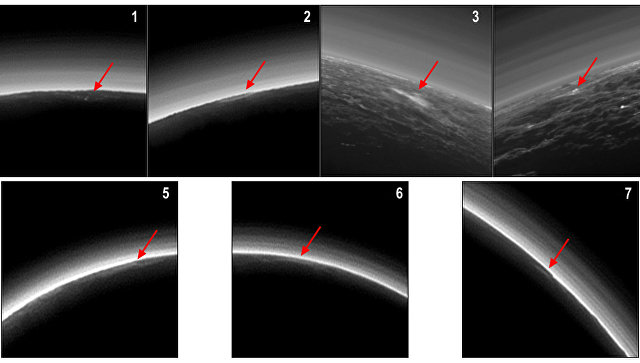 The scientific team of the probe New Horizons found the first hint of the existence of clouds in the atmosphere of Pluto, analyzing the photographs obtained by its cameras during a flight past the dwarf planet and its “suite”.

“In the images taken by New Horizons, we managed to find only seven small objects that can be clouds, until we can say that at least one of them is a cloud with a 100% probability, but all of them look like and have those characteristics , Which must have clouds, “- write Alan Stern (Alan Stern), the head of the mission New Horizons, and his colleagues.

When the New Horizons probe arrived in the Pluto system, Stern and his team were surprised to find that Pluto has a complex atmosphere, in which there are many different molecules, where sometimes it snows, winds blow and other weather and climate processes occur. It turned out that the atmosphere of Pluto was much closer to the behavior of the complex air layers of the Earth or Titan than to simple gas shells similar to the Pluto dwarf planets, living at a great distance from the Sun.

Back in October of this year, Stern said that in some pictures of the Pluto atmosphere that New Horizons received at the time of its closest rapprochement, July 14-15, 2015, there are objects similar to clouds.

This discovery contradicted the scientists’ view that the atmosphere of Pluto is too cold and rarefied for the existence of clouds of frozen nitrogen or other gases, which forced the participants of the New Horizons mission to re-analyze the data and calculate the number of such structures in the atmosphere of a dwarf planet.

To search for clouds on Pluto, which, as shown by the climatic calculations of Stern and his colleagues, may be quite different from their terrestrial “cousins,” scientists had to work out a set of three criteria that clearly distinguish clouds from other atmospheric phenomena. Among them were: high brightness, “fluffy” edges and isolated borders.

These criteria, as shown by automatic and manual analysis of images from the LORRI and MVIC cameras, corresponded to only seven structures in the atmosphere of Pluto, occupying less than 1% of its area. Accordingly, it can be said that the air of a dwarf planet is almost incapable of producing clouds, at least in the form in which New Horizons can see them.

Interestingly, all these seven structures were located on the boundary between the “night” and “daytime” hemispheres of Pluto, which may indicate that fluctuations in the temperature of the surface of the dwarf planet associated with its illumination by the Sun are involved in the formation of these clouds.

In the past, as Stern notes, scientists believed that these temperature changes would be too small to form clouds. If the existence of clouds is confirmed in the future, then it will be possible to say that this is actually not the case.

On the other hand, such a cloud arrangement prevents the final confirmation of their existence, as New Horizons could not see their shadow, which they could cast onto the surface of Pluto. For the final disclosure of this mystery, as the scientist has already said, it is necessary to send a full mission to Pluto, which will constantly study it, and not just fly by the planet at high speed.