In the atmosphere of Venus discovered a giant wave 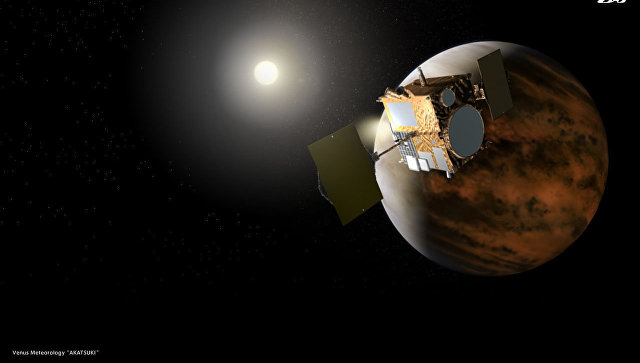 Probe akatsuki found on Venus, a giant wave that moves with a huge speed of 360 kilometers per hour through the upper atmosphere, but remains standing for observers in outer space.

The atmosphere of Venus has interested scientists for nearly 60 years, since the beginning of her serious study of the Soviet probes Venera series and the American spacecraft Mariner. Fairly quickly, scientists have found that the atmosphere of the sisters of Earth is absolutely not similar to the air envelope of our planet.

She was extremely tight, and the pressure at the surface of Venus is nearly a hundred times higher than on Earth. High density makes carbonic acid, which accounts for about 95% of the mass of the atmosphere of the second planet of the Solar system to behave as an exotic fluid, and produces a number of other unusual atmospheric effects. In particular, the atmosphere of the morning star rotates 60 times faster than the planet itself, causing super-power of the wind, moving at a speed of 500 kilometers per hour.

Probe akatsuki was launched in may 2010, had to begin to learn the secrets of the Venusian atmosphere in December 2010, however, it flew past the planet due to problems with the engines. In five years, when akatsuki, describing a circle around the Sun back to Venus, the Japanese engineers were able to slow down the probe and bring it to a stable orbit, in fact, raising the mission, had already considered lost.

Today, Masato Nakamura (Masato Nakamura), head of mission, and his colleagues told about the first results of the work of akatsuki — including about the opening of an unusual structure in its atmosphere, similar to the famous letter Y found in the atmosphere of Venus back in the mid 60-ies of the last century.

By studying the images of the upper atmosphere of Venus that akatsuki did in the first months of operation in its orbit, scientists discovered a gigantic wave length of 10 thousand kilometers, which stretches from one pole of the morning star to another and slowly moves through the air gap at a height of 65 miles. This structure scientists have noticed the first day after the arrival of the akatsuki, and she continued to exist at least until may of this year.

The atmosphere of Venus due to its unusual properties, moving faster than the planet itself rotates, so if you look at it from space, it would seem that the giant line is in place, and the clouds float through it. By coincidence, she actually is over the same point on the surface of Venus, slowly moving with her.

After analyzing its properties and difference in temperature, speed and other properties of the atmosphere before and after its borders, Japanese planetary scientists came to the conclusion that they are dealing with the so-called atmospheric gravity wave.

Unlike their elusive cosmological namesakes, scientists know very well how to form and disappear atmospheric gravity waves. They result from the interaction of large atmospheric fronts c the mountain ranges and other large natural obstacles. Traces of their existence can be seen in the waves on the calm surface of the sea, Cirrus clouds and other phenomena.

The problem lies in the fact that Venus has no major mountains and other landforms that can generate gravitational waves, record high, as scientists assume, for the whole Solar system. Respectively, or the data on the topography of Venus is wrong, or wind and air masses near the surface of the planet, where do such waves do not behave like on Earth.