In the behavior of dark matter, traces of “new physics” 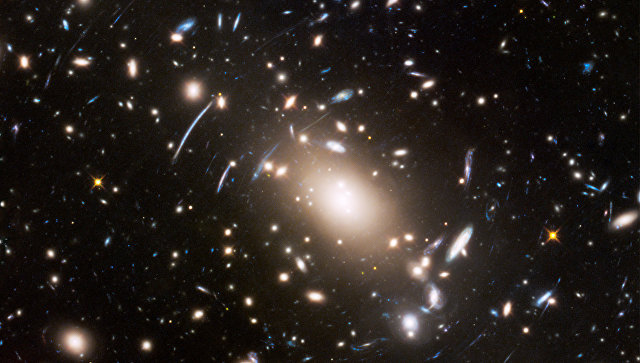 The Hubble Orbital Observatory received unusual photographs of large clusters of galaxies whose inhabitants “tremble” as they move around the common center of mass, indicating that there are unknown properties in the behavior of dark matter, according to an article published in the journal MNRAS.

For a long time, scientists believed that the universe consists of the matter that we see, and which is the basis of all stars, black holes, nebulae, accumulations of dust and planets. But the first observations of the speed of motion of stars in nearby galaxies showed that the luminaries on their outskirts move in them with an impossible high speed, which was about 10 times higher than the calculations based on the masses of all the stars in them showed.

The reason for this, as scientists believe today, was the so-called dark matter – a mysterious substance, which accounts for about 75% of the mass of matter in the universe. As a rule, in each galaxy there are about 8-10 times more dark matter than its visible “cousins”, and this dark matter keeps the stars in place and does not allow them to “run away”.

Today, almost all scientists are confident in the existence of dark matter, but its properties, in addition to its obvious gravitational influence on galaxies and galaxy clusters, remain a mystery and subject of controversy among astrophysicists and cosmologists. For a long time scientists assumed that it was composed of superheavy and “cold” particles – “WIMPs”, not manifesting themselves in any way, except by attracting visible clusters of matter.

The unsuccessful search for WIMPs over the past two decades has led many theorists to believe that dark matter can in fact be “light and fluffy” and consist of so-called axions – ultralight particles that are similar in mass and properties to neutrinos. Other researchers, in turn, suggest that dark matter can consist of several different components, one or more of which may gradually decay.

Harvey and his colleagues found the first traces of the existence of such exotic forms of dark matter, observing with the help of Hubble for the ten largest clusters of galaxies in the immediate vicinity of the Milky Way, whose mass exceeds the solar one by about 100 trillion times.

Scientists were interested in two things – how the galaxies were distributed in the aggregate as a whole and how the brightest inhabitants of these “star families” moved when new members appeared in them. To discover these properties of clusters, astronomers have calculated the behavior of their virtual counterparts using supercomputers, and then compared how much the actual photos and the results of simulations coincided.

It turned out that the trajectories of the movement of all the large and bright galaxies in these ten clusters did not coincide with what the theoretical calculations showed-they constantly “lost their way” and “trembled”, revolving around the common center of mass, and did not move strictly along a straight line, as predicted by the theory.

Such a tremor, as Harvey and his colleagues now believe, was due to the fact that in the centers of these clusters there is not one but several “cores” of superdense clumps of dark matter. Their existence is not predicted by classical cosmological theories describing the properties of this mysterious substance, and if the discovery of the “Hubble” is confirmed, then scientists for the first time will be able to talk about the discovery of the first real traces of “new physics”.