In the bombardment of ancient Mars asteroids discovered a “break” 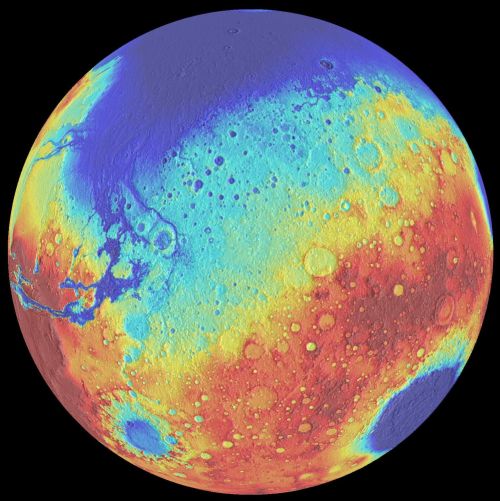 Starting from the early days of the history of the solar system, collisions between astronomical objects influenced the formation of planets and changed the direction of their evolution. Studying the history of the early bombardment of the surface of Mars, scientists from the Southwest Research Institute (Sweeney Research Institute, SwRI) and the University of Arizona, both scientific institutions of the United States, discovered that for a fairly long period of time collisions of large space objects with the surface of Mars did not occur.

“These new results indicate that the history of collisions of asteroids with the surface of Mars is in good agreement with the versions of the history of the bombing of the Moon, Mercury and collisions occurring within the Main Asteroid Belt,” said the chief author of the new study, Dr. Bill Bottke of SwRI. “We refer the later clashes to the so-called Late Heavy Bombardment.”

The early bombardment of the surface of Mars is closely connected with the bombardment of the inner part of the solar system. The depression of Borealis, the largest and most ancient depression on the surface of Mars, is approximately 7500 kilometers in diameter and covers most of the northern hemisphere of the planet. A new analysis shows that on the edge of the Borealis hollow there is only one impact crater of a later origin, called Isidis. This imposes strict statistical limitations on the number of large depressions that could form on Mars after the formation of the Borealis basin. Moreover, the state in which there are four younger than the Borealis basin, the depressions on the surface of the planet – Hellas, Isidis, Argyre and now buried under a layer of later rocks of the Utopia depression – turned out to be very similar to the state of the larger and ancient basin Borealis. The good preservation of both the basins of Borealis and these younger craters indicate that the craters that could have formed between the formation of the Borealis basin and these younger funnels also had to be well preserved. However, there were no other major depressions in the same state on the surface of Mars. Since the age of the Hellas, Isidis and Argyre valleys is estimated at 3.8-4.1 billion years, and the basins of the Borealis at 4.5 billion years, the minimum duration of the “break” in the bombardment of the surface of Mars should have been about 400 million years, The scientists conclude.