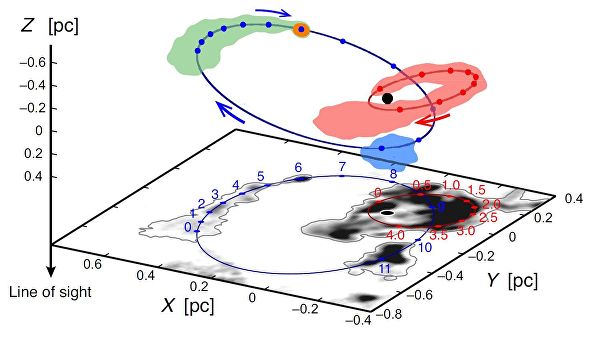 Scientists have discovered in the core of the Milky Way a mysterious invisible object wandering around the interstellar medium. “Photos” of this black hole, whose mass is about 32 thousand times higher than the solar one, were published in the electronic library arXiv.org.

“When I first saw the data that the ALMA telescope was receiving, I was very happy. The clouds of gas moved in this corner of space not in a random way, but along certain orbits, which indicated the existence of an invisible object with a huge mass,” said Shunya Takekawa ) from the National Radio Astronomy Observatory of Japan in Nagano.

Observations on the first epochs of life in the Universe show that supermassive black holes weighing several billion Suns already existed in the first galaxies of the universe, which would be impossible if they began to grow from scratch, as scientists believed before.

For this reason, astronomers have long been looking for so-called “intermediate-mass black holes”, which could arise during the direct collapse of matter and serve as “germs” for the birth of supermassive holes. Today, astronomers are aware of the existence of five black holes of this kind.

The X-1 X-1 pulsar in the galaxy M82, the HLX-1 source in the Phoenix constellation, “catapulted” from the galaxy ESO 243-49, the black hole NGC2276-3c in the galaxy NGC2276, as well as CO-0.40-0.22 and GCIRS objects claim their role 13E in the Milky Way. All of them have not yet received full recognition from the community, as many astrophysicists doubt their existence.

Takekawa and his colleagues added another candidate to their number, who is much closer to us than all of his “competitors”, studying the vicinity of the center of the Galaxy with the help of the ALMA microwave telescope.

This observatory, as scientists explain, sees even the coldest accumulations of gas and dust in the Universe. This allows it to be used to search for completely invisible objects, such as black holes, by observing how they “mix” the surrounding space and eat the gas and dust clouds surrounding them.

Japanese scientists used this feature of the telescope, studying the “suspicious” clubs of very dense gas, which are periodically found in the central regions of the Milky Way’s core. Astronomers have long suspected that large black holes can hide inside them, but until recently they have not had the opportunity to verify this.

Last May, Takekawa and his colleagues noticed that two such clouds, located just 20 light-years from a supermassive black hole in the center of the Galaxy, quickly rotated around a common center of mass.

Watching the molecules of hydrocyanic acid and carbon disulfide, scientists were able to accurately calculate the speed of their movement. It was about 40-70 kilometers per second, which indicated a huge mass of an invisible object, HCN-0.009-0.044, around which gas accumulations moved.

According to current estimates by Japanese researchers, it is about 32 thousand times heavier than the Sun, which allows it to be unambiguously attributed to the number of black holes of intermediate mass. This is supported not only by its mass, but also by the absence of any traces of supernovae or other cosmic cataclysms capable of accelerating gas to very high speeds.

The clouds themselves, which received the names “Shar” and “Lenta”, are at a relatively large distance from the black hole, about 0.2 and 0.6 light years from its event horizon. Therefore, they are unlikely to be swallowed up in the near astronomical future.

Interestingly, the unusual trajectories of their movement suggest that they were captured by the attraction of a black hole relatively recently. This, in turn, suggests that HCN-0.009-0.044 may be a unique “wandering” black hole, migrating through the center of the Galaxy in search of the next “dinner”.

Her study, scientists hope, will shed light on the history of the evolution of supermassive black holes and reveal their connection with similar objects.