In the center of the galaxy, perhaps, there is no dark matter 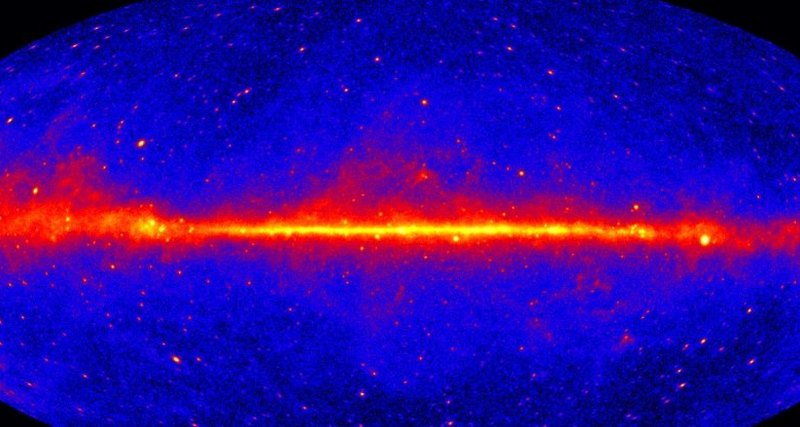 The mysterious excess of gamma radiation in the center of the galaxy can be explained not by the radiation of dark matter, but by less exotic causes – for example, by the total radiation of thousands of dying stars, the authors of the new study believe.

The center of the Milky Way (galactic bulge) emits in the gamma-range much more intensively than it should according to calculations based on the distribution of stars. this discrepancy was noticed ten years ago after the launch of the space gamma-observatory “Fermi” and was long explained by the presence in the center of the galaxy of dark matter, the decay of which, due to the radiation of extragalactic sources, generates quanta of high-energy gamma radiation.

The existence of dark matter is not proven, but astrophysicists use this concept to explain gravitational anomalies and radiation, the source of which is unknown. It is assumed that dark matter can not be detected by existing methods, however, just like ordinary matter, it consists of particles having a mass, in the decay of which energy is released in the form of electromagnetic radiation.

In recent years, more and more arguments have been voiced against the assumption that the gamma radiation of the bulge is associated with dark matter. Last summer, a group of astronomers led by Alfredo Urbano of the National Institute of Nuclear Physics in Trieste discovered a compact intragalactic source of gamma radiation of unknown nature near the supermassive black hole Sgr A *, which is located in the center of the Milky Way.

A new study published in the journal Nature Astronomy also points to an intragalactic source of gamma radiation. This time the scientists, with the help of the same Fermi Observatory, obtained a distribution of gamma radiation in the vicinity of the galactic center and noticed that it correlates with the distribution of stars, and is not evenly distributed throughout the bulge, as one would expect if the source served dark matter. On the radiation map, scientists applied not a spherical region of uniform luminescence, but two intersecting segments.

Astronomers even make a cautious assumption about the nature of the source – perhaps these are thousands of millisecond pulsars (neutron stars rotating with a period of thousandths of a second). The neutron star remains in place of the exploded massive star, so they are often called “dying stars”. It is possible that the excess of the gamma radiation of the bulge is the total energy of the “star cemetery” in the center of the galaxy.